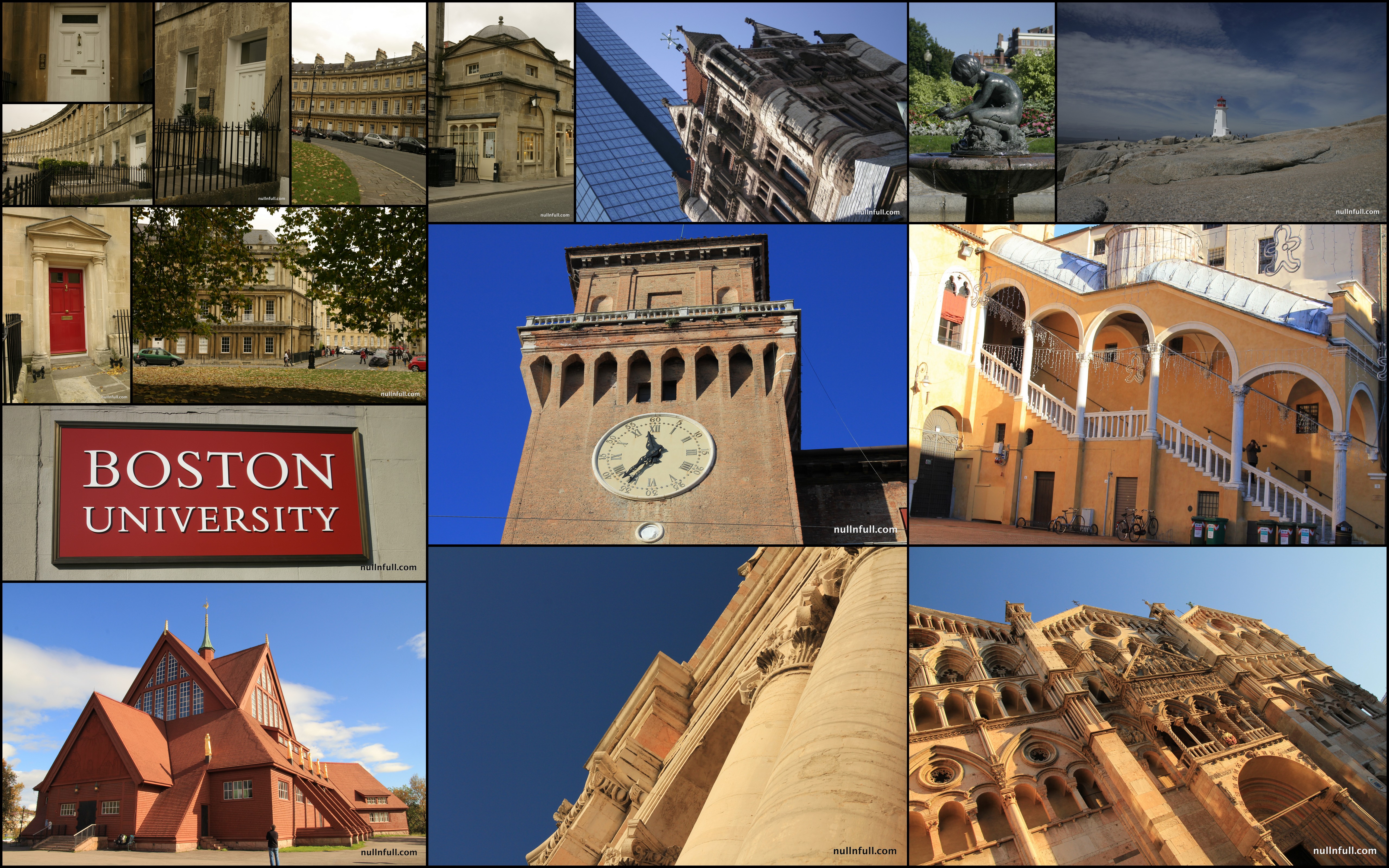 Best Places To Live, Best Retirement Heavens, The Healthiest Places to Live, The Best Climates In The World…you name it! It’s quite widespread to publish a ranking of the best places to live. Magazines and research institutions make an ongoing effort to decide what makes a perfect place perfect. While their lists are somehow interesting I am sure that each person has his/her own preferences that has nothing to do with the ‘average’ or ‘popular’ choices.

Here is my own, personal and very biased list of places where I could live at least for a year. Having fun, of course.

No surprises, my number one is Italian town Ferrara. You might have not known about it but Ferrara is a ‘World Capital Of Cycling‘. Yes, no mistakes here. In this town EVERYBODY has a bicycle and they use it every day. Stand for about 10 minutes on the main square and you will count at least a hundred people on a bike. What is even more important in contrast to Holland the major part of the year this city is blessed with good weather. Even in the middle of the winter the climate is so mild that you can cycle without a risk to freeze to death. No wind, no snow (usually, with some exceptions), no rain. Just a romantic fog. Ferrara, the facade of the Duomo

Ferrara is a UNESCO World Heritage site as the city center was constructed in the medieval times and has not been reconstructed since then. Numerous narrow streets make you feel like time stands still: red bricks, original grout, old wood, ancient stone, impressive arches- there is pretty much everything in this town.  And, quite obviously, the city center is small, everything is in a walking distance, easy to reach. This town has a rich and complex history with famous d’Este and Borgia families on the top of it. In the city center there is a medieval moated castle called Castello Estense, or simply castello by the residents. Medieval times are revived during annual Palio events. Palio of Ferrara is the most ancient palio in the world and was established earlier than famous Palio di Siena. Every September there is also Ferrara Balloons Festival and the view of the balloons over the city is spectacular. Every season in this town is lovely. OK maybe late November is not the best time to visit Ferrara but even the winter fog in December and January makes it nice looking and fascinating. With its warm and noise bars at every corner and gelateria this is just a perfect place to be. So definitely, Ferrara is my top choice. Just before the show It would be hard to find a bigger contrast between these two: Ferrara and Boston. They say that Boston is the most European like city in the US and I think this composition of American and European elements is perfect. I loved this city from the very first sight. It has more sited directly related to the American Revolution than any other city and so many catching eye sites!

I totally agree with Henry James (one of my favorite authors) that Boston is simply elegant. It has so many charming places to walk around that one year would be not enough to appreciate all of them. This is a costal city which is a huge advantage making the climate mild. I remember the color of the sea in late September and under the full sun: this was something I would definitely call ‘navy blue‘. And that was the only time in my life I saw it. The rest is just plain blue. History is all over the place but it is so different than Ferrara. There is also federal architecture to see and beautiful gardens to sit in for a while, relax, enjoy the sun. Why would I like to live in Boston? Because it created an excellent balance between modern vibrant city and cozy mid-size town with rich history. It is easy to use public transportation, the airport is within a reasonable distance, other lovely sites of New England are in a reachable distance and if you become tired with the noise of metropolis you can easily escape. One last thing: ‘Boston, Massachusetts’ always reminds me one the M*A*S*H* episode when Charles tries to phone his sister Honoria and repeats it at least z dozen times, every time more and more irritated. Brilliant! Now, this city might shock you a bit on my list, however, I still believe this is the right choice. I won’t try to convince you that Halifax is the most beautiful city in the world but it definitely has something particular. For me this was a mix of immigration history, maritime character of the region and lovely modern spots to spend time with friends. Halifax, despite of being an important hub in the region, is not oversized. It keeps good proportions of old and new. Being a Canadian city might be a good enough reason to live there but Halifax is much more than that! It has a harbor, where huge ferry boats arrive, cozy cafes, elegant shops, bicycle roads, and most of all: landscape of Nova Scotia at your fingertips. Peggy’s Cove, Cape Breton, Lunenburg, Mahone Bay, whales watching, Prince Edward Island, and even Newfoundland is close enough to visit all these places while living in Halifax. As an Atlantic region is has a strong maritime character which means dozens of old romantic lighthouses. I could live in Halifax just to visit one lighthouse every weekend! The view of the rock washed by the waves, deep blue of the ocean, strong wind and the lighthouse in the middle moves me every time. At least once in a lifetime I would like to follow a trail of lighthouses in Canada or elsewhere. OK, two cities to go.

You might, and most of my Italian friends definitely would, ask: Why on earth anybody would like to live in Kiruna? There is bloody cold and bloody dark for the most part of the year. Yes, it is cold and it is dark, so my guess it: that’s why I would like to live there. To try how it is. To adore the amazing aurora borealis, to see unbelievable quantity of snow, and to wait for the spring as desperately as never before. When I went to Kiruna for the first time I got fascinated with small closed community of people whose main task is to survive the winter. I’m sure that Kiruna will never get any chance to become the best place to live in any official ranking, however, it might win the competition of most interesting, intriguing or even bizarre place to live. Strongly influenced by the local native population of Sami and their heritage this is an amazing example of the human endurance and perseverance in one of the most harsh climate in the world. And still, doing it in an eco friendly way. But the true reason why I would like to live in Kiruna is the proximity of the highest peak in Sweden- Kebnekaise and two parks: Abisko and Sarek National Parks. I would walk the mountain trails every holiday I had. The beauty of landscape is indescribable. And so I won’t even try. For sure, Kiruna would be a destination for tough and adventurous people, but nevertheless, it is undeniably fascinating place to live. My last and very sentimental choice: Bath. Sentimental mainly because of my love towards English literature and fascination with georgian times. Bath is at the last place of this list mainly because of the English weather. It would be hard for me to live in a place where it rains so often, nevertheless, the city is fascinating enough to make this sacrifice. Bath has rich history going back to the Roman Empire times. The first SPA in the UK was established in Bath (called in latin Aquae Sulis), to become later a popular social meetings place. By getting famous people of the georgian times to spend their holiday there and being in such proximity to London, it was a very posh place as we would call it today. Five theaters, restaurants, elegant Assembly Rooms offered a high quality entertainment to its guests. The city architecture was strongly influenced by two excellent architects of georgian era: John Wood and his son. Three most spectacular architectural sites in Bath are: The Royal Crescent, The Circus, and The Pulteney Bridge. Walking around, when it’s not raining of course, is a good opportunity to read classic books again. The main characters of the Dickens, Austen or Bronte books will speak differently with this lovely and harmonious background. Even if today you won’t meet any carriages, old  fashion coaches or hackneys the view of the old and well kept buildings become a sort of a soundtrack to your reading. And last but not least, the Bath Abbey (The Abbey Church of Saint Peter and Saint Paul). This is a real architectural pearl! There is no doubt that you will become bewitched with the view of the fan vault and stained glass windows. This is absolutely fantastic! Even is you are not a huge fan of architecture you will love the figures of the angels climbing to heaven on two stone ladders. Bath is also excellent connected to Bristol and London which makes is very attractive in terms of living conditions. It has two universities and a large offer of cultural events every year. So, that’s pretty much it. I think this is one of a kind list of best places to live. Everyone has one, right? I would love to know yours so if you wish please comment this post.