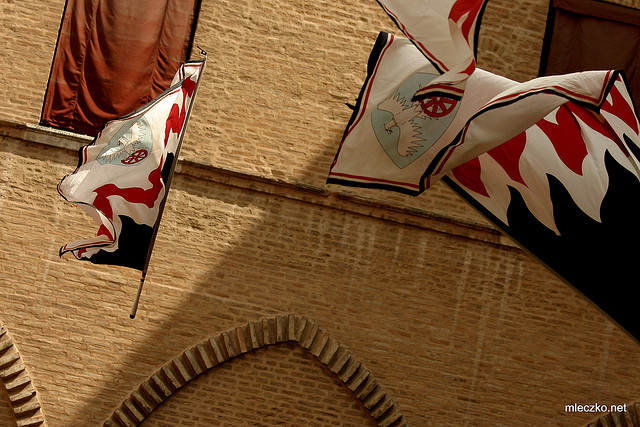 You may wonder whether it is worthy to visit certain places when festivals or cultural events are taking place. Well, there are some serious pros and cons but I am definitely convinced that some of the places are especially attractive when traditional feasts are on. I wasn’t a huge fan of massive events as I hate crowds until I participated in famous Italian palio. I remember my first palio as if it was yesterday. Tribute to the Duke

Now, if you are familiar with word palio the first thing that comes to your mind is Siena. Not long ago you saw it in the theatre. One of the previous James Bond series Quantum of Solace starts with a scene shot in Siena when the final race of palio is on. No doubt the final race is the most exciting part of this competition, however, you should know that palio is much more than that. Let’s leave Siena for a while and let’s start with the most ancient palio in the world: Palio di Ferrara. It was established in 1259 and constituted of four races: horses, donkeys, men and women, and it hasn’t changed for more than 750 years. The prize- palio– was a piece of textile which might have been used to sew exclusive clothes. The second and third prize was a piglet and chicken, respectively. In highly segregated society this was one the few events open to everybody. Whoever wanted to participate could register and run or ride to win. Also, having a good clothes brought to the winners respect and a certain sense of nobleness. Gradually, the race was enriched with new elements: tribute to St. George, official benediction of participants in cathedral, and finally, the competitions of flag-wavers called sbandieratori accompanied by musicians. Today, palio is a multi-event historical attraction that gathers the residents and tourists, around the history of the city.

And from now on it is possible to join me to watch Palio 2015! You can book today your stay in Ferrara and see this amazing event. Participants of the official celebration are dressed in renaissance like clothes which makes it really fascinating to watch their walk through the city center.  The clothes, music, competitions, but also original architecture and the overall atmosphere brings you back to renaissance Ferrara. Some of the events take place in late evening when it’s already dark which makes it even more intriguing to watch.

Why I think Palio di Ferrara  is superior to the one in Siena?

There are at least two reasons: first, because of its more intimate character and evocative atmosphere of renaissance times; second, its much less commercialized and, as a result, less crowded. So, if you wish to see it at least once in a lifetime with your kids come to Ferrara instead of Siena.

I got acquainted with few people engaged in annual organization of the event and their dedication is admirable. Their effort to involve the youngest generation in the event is very important in cultural heritage transmission. I also participated in tryouts of the boys who contribute to the event as sbandieratori. The tryouts starts in the middle of the winter and it’s often so foggy that they can’t see the flag they’re throwing and catching. One of the disciplines demands collective effort and extreme synchronization: about 30 people need to walk, play on instruments and throw flag in the same moment. What’s more, they need to change choreography every year! So, it’s not only for tourists event. They really compete to win the trophy. The audience on the courtyard watching Tribute to the Duke

Another reason to see palio in Ferrara is that this is a series of events so you can pick up the date you like. You are not attached to one day or two days a year. From March through May, every Sunday the courtyard of Castello is occupied by the participants of the official Tribute to the Duke. A short but compelling ceremony awaits you. Later in spring and summer time there are further celebrations of benediction in cathedral, flag competition and the race itself. You need to check the exact dates of particular events on the official website as it varies every year.

I can also tell you a secret: the national champion of individual flag-wavers competition is member of contrada Borgo San Giacomo. So, to see the best man all you need to do is to visit Ferrara when Palio is on. To sum up, I think that while not ALL feasts are worthy to participate in palio is definitely the one I would recommend. Second festival I was happy to participate in was Cherries Blossom Festival in Washington DC. Despite my concerns the city was not invaded by the school trips and the view of all blossoming trees was unforgettable.

I love Ferrara – alternative way to spend your holiday

Have you ever thought about visiting Italy? Here is an alternative way on how to visit Italy and get really close to the Italian way of life. I created a project ‘I love Ferrara‘ so you could join me and experience how beautiful and tasty Ferrara is. If you wish to immerse in Italy book your holiday now!