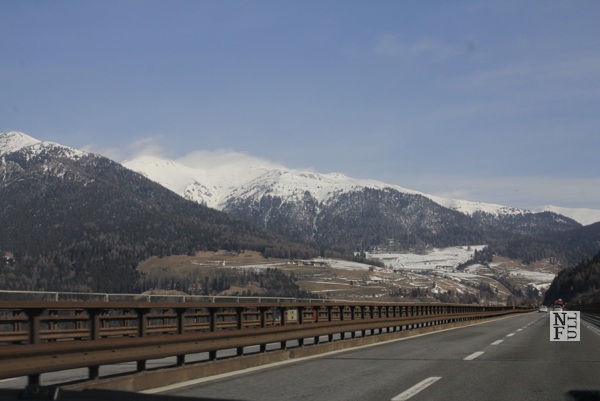 The German system of highways is one of the best thing this country has to offer to the tourists. Seriously! Travelling across Germany by car is really pleasant. The highways are excellent in terms of its density, interchanges and overhead direction signs, but also in terms of good driving conditions in the winter season. What really drives me crazy is the growing number of traffic jams, but this is true for all well developed countries, isn’t it? And Germany is not an exception. Autostrada in the Italian Alps, near Trento

Is that true that there is NO speed limit in Germany?

Well, the German autobahns are famous of its advisory speed limit rather than the general speed limit. While this is generally true you can still get caught for exceeding speed limit. How come? It’s because the advisory speed limit is valid unless otherwise regulated by signs. Generally 2km before each interchange the speed is limited to 120km/h for safety reasons, then, the speed is limited in the vicinity of streams and lakes, on the bridges, in the case of sharp curves, or between certain times of the day and night (between 22:00-6:00), and couple of other exceptions. All sum up gives you practically around half of the length of the German highways under the speed limit. You need to be focused as the quantity of the speed limit signs might surprise you.

Autobahn in Austria near the border with Italy

Oh, yes, and the road works! The Germans are famous of its reliability and serious attitude towards public works which is very true in the case of road works. At least in the case of their highways the works are always organized “with a flourish”. What I mean is the scale of it. When you’re passing any of them you can usually admire a huge terrain being under construction. Deep excavations, mountains of sand, huge caterpillars and particular elements of new bridges are amazing. But the scale of road works has also dark side: usually when a few kilometers of two-line section is under construction the equivalent of it at the other side of the highway is shared by two driving streams, which drastically limits not only the speed (under 60km/h or even 40km/h) but also generates considerable traffic jams. When you meet one road work along your German adventure it’s OK but if you have a bad luck and you meet, let’s say, five, your trip takes twice as much as planed. Autobahn in Austria with speed limit

The code of conduct

Don’t be surprised if you see the Germans braking sharply when the speed limit sign is seen. This habit might be dangerous for the foreigners who are not used to such literal treatment of the signs. The German drivers simply believe in everything what is written along the road and they follow the rules without a second thought. As far as the safety reasons are concerned it is justified and the are no complaints. However, I saw plenty of situations when the only reason of a traffic jam was a speed limit followed by everybody. Ironically, the speed limit is temporary introduced because of the traffic jams on the road, causing even bigger traffic jam. And that how it goes: self regulated mechanism of traffic jams.

All cars should occupy the right line of the road starting with the slowest trucks, campers, buses and vehicles with trailers. In the middle line you need to drive considerably fast, but the majority of the drivers follow the 130km/h advisory speed. The left line is  occupied by the people in rush and it might be even more than 200km/h. Now, I’m not the crazy driver and I usually follow the general rules (to all my friends: STOP LAUGHING!), but I can’t say that driving 200km/h on the German highways is unpleasant. If you wish to feel the wind blowing in your hair, the German highway is the right place. Remember to open the window ;-) and slow down when the sign says so.

What is the difference between German, Italian and Austrian highways?

The German highways in the major part are three-lines while in Austria and in Italy this is much less so.

My least favorite highways are those in Austria because of its ridiculous speed limit of 100km/h. Few years ago there was a huge and very burdensome road work near Innsbruck with construction of tunnels and bridges. Everybody was hoping for the improvements after months of driving 40km/h because of the traffic jams in the surrounding of the city. Today, even if the road works are completed the speed limit of 100km/h is still on. The second reason of my dislike towards the Austrian highways is the system of payment. The Austrian vignettes are sold for peculiar number of the days: the shortest is a 10-days vignette and this is what you’re normally buying, so if you go to Italy for 2-weeks holiday you need to pay TWICE! What’s even more frustrating despite of buying the vignette there are additional fees for some tunnels and bridges. Autobahn in Austria near Innsbruck

The Italian system of autostrade has also some problems, although, you pay exactly for the segment of the road that you drove. The further south the quality of the highway decreases, that’s the general trend. Also, the road works are much worse marked and taken care than in Germany so you need to be much more careful. Some of the areas are exceptionally crowded, like A4 between Milan and Brescia or even further towards Venice, and it is advisable to avoid these roads. In my case, I had two very unpleasant events with this highway involved. Once, my passenger was late for a plane because of the traffic jam. What’s even worse the next day we drove the same highway with extra time and guess what happened. We got stuck in a traffic jam again. Eventually, my passenger was the very last person boarded on the plane that day. Crazy, I’m telling you.

To sum up: while driving a German highway is not a sort of ‘must do’ activity it is still a very memorable part of your travel around Europe. View from the window towards the Italian Alps The views along the Italian autostrada