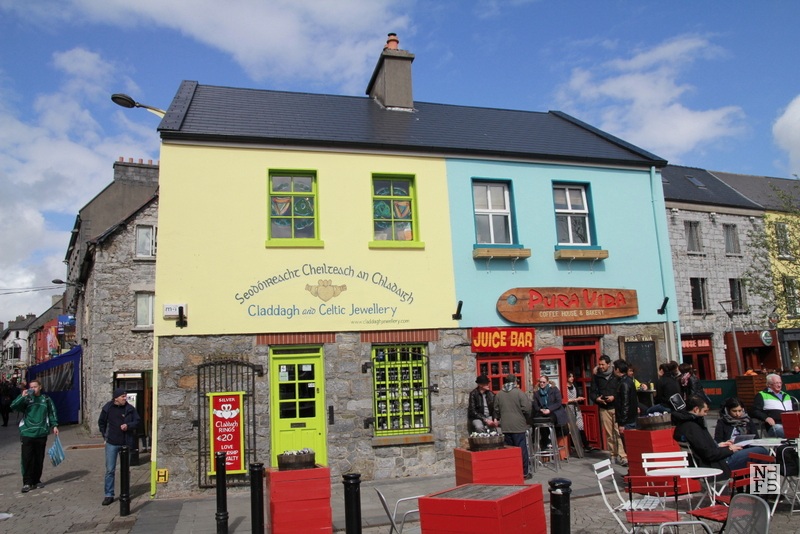 I always knew that meeting people as you go is probably the most important part of any travel. Meeting your friends is even more so. But meeting a friend after 10 years is truly spectacular. Ten years is a long time. That’s enough to go around the world at least once. Here is my story about a very special meeting in Galway. A decade has passed since I saw Damien last time, and funny thing, it was in Italy. We had been studying in Milan and met one evening in a student accommodation. At that time the university had a particular idea on foreign students: they placed all of them in the same accommodation, who knows to what purpose. Integration, I guess. This was quite striking: a red hair guy in Italy. He was- and still is- very tall, so it wasn’t difficult to notice him. You could see him a mile away on a street as almost nobody has red hair in Italy. Quite naturally we spent a bit of time together, visiting the city and struggling with the language challenges (at least WE spoke the same language). While hanging around, just as other students did, we joined some of the ‘happy hour’ thing, student parties, which after ten years we have only a misty memory of. I remembered Damien’s face burnt by the sun after one of the weekends and he remembered one of the parties we went together, that I have no memory of. All in all, this was charming to chat about the past, especially when the memories are good. For ten years the only thing we did was exchange emails from time to time. It was hard to follow the country of residence of my friend as he traveled the world more than I did but from time to time we always exchange important information. Actually, this meeting in Galway is a proof that electronic media helps to sustain and develop social ties. There was time when Facebook did not exist (I know it’s hard to believe) and simply through emails’ exchange it was still possible to stay in touch. Just few weeks before my trip to Ireland I wrote to Damien again and he replied with enthusiasm that we need to meet. Well done my friend, I would say! Lunch at the Cellar Bar

There is no better thing than visit a city with locals, therefore, I accepted Damien’s invitation with joy. He and his lovely girlfriend showed me their hometown Galway. They spent all Saturday with me in this enchanting town, including tour at the university where they both studied, local market, and their favorite restaurant. Oldest church (St. Nicolas), Cathedral, Lynch’s Castle, River Corrib Walk, NUIG, Lynch’s Window- all that with compact and interesting explanations. They were also extremely helpful in purchase of Irish SIM card which worked brilliantly in a remote location of the Aran Islands (receiving 200 free text messages and taking into account they were only people with the Irish number I knew this was a risky business;-) My stay in Galway was awesome! Thanks to you guys I had a great and stress-free time.

There is a clever idea. Two ideas, actually. We had an idea to meet this year in Milan (the same place, ten years later), or to meet precisely in TEN YEARS from now. We’ll try to figure it out which option wins. I will keep you posted. In a mantime the story about my stay in Ireland continues here.