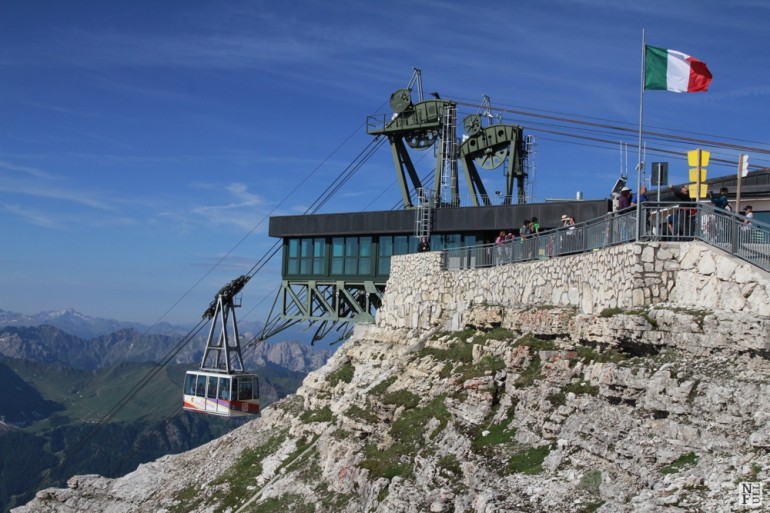 The track I’m describing here was done in the second day of our stay in the Dolomites. We started at 9:30 with a ride from Passo Pordoi to Rifugio Maria Sas de Pordoi and we started our walk from there. As the ride with a funicular railway is available to everybody the mountain hut was crowded. We hurried up and followed the trail to reach another mountain hut in about 20 minutes, passing by an organized group of German pupils with a guide telling the stories on geology. Our stay in Rifugio Forcella was short. From there we saw the whole range of Gruppo del Sella and this was a bizarre feeling as you actually see it from within. This is amazing as the only thing you see are ROCKS. No trees, to green, no plants, nothing. Just rocks and snow. This year was really special because of heave and very late snow (it was snowing in May which is unusual for Italy). In fact, the deep snow along the trail made it comfortable and very chilly at the same time. I really love this feeling: the sun was shining, the temperature was around +22 but we still walked on the snow. After 1h45min from the Rifugio Maria Sas de Pordoi we reached the third mountain hut that day: Rifugio Boe. We drank warm tea and ate our own sandwiches (not to mention that each of us had a different stuffing: ham, mozarella, crudo and mortadela. 4 people= 4 tastes, obviously). Just before arriving at this hut we saw a dramatic scene: the dog run down from a very steep slope. Just for fun, I guess. We had an impression that he won’t be able to get back as the slope was covered with snow. Watching his run up was a suffering. All people around held their breath watching the scene. We started to discuss whether he’s able to run back and what happens if he didn’t but at the end he succeeded and run straight into arms of his owner. Phew! After a short brake in the hut we decided to climb Piz Boe (3152 masl) and this was an excellent decision. The weather was just perfect to proceed with the walk. This stage of our walk was most pleasant rewarding us with stunning views. The track was well prepared, including some chains and ropes in difficult parts like corners over the edge. The view from the peak was amazing. No words to describe it. Are you interested in one day hike in Germany? Well, then click here!

The story to be continue…