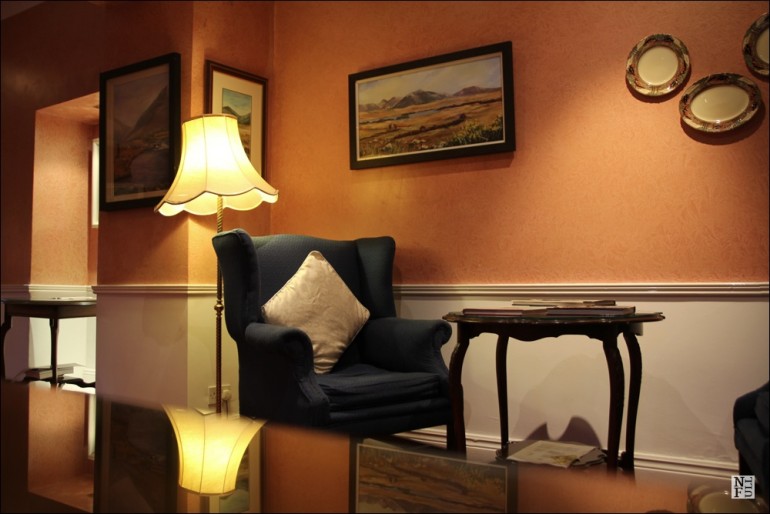 One of the reasons why I travel is meeting people. The locals, preferably, but also other travelers. My recent trip to Ireland mixed both and I consider this experience a perfect one. I’m starting to tell you the story from a meeting in Zetland Country House Hotel with an Irish fiddler. No jokes here: I really met an Irish girl who played the violin. Wonderfully. Try to imagine a day full of activities, places visited, people you have been talked to, and your feeling of the total exhaustion at the end of the day. This is what we had been doing for the whole day with a bunch of bloggers met at the Tbex conference who got invited to one of post conference trip: Wild West Atlantic Coast. We crossed Ireland from the east to the west and went to one of the unspoiled areas at the Atlantic Coast: counties of Mayo and Connemara.

After a very busy day we got amazingly warm welcome from the owners of the Zetland hotel: when we entered the hotel the fireplace was warm, the armchairs looked cosy and the traditional Irish music was a fabulous background so we all could feel well. The owner was waiting for us with the local whiskey (this is not a spelling error: Scotch whisky and Irish whiskey are distinguished in spelling; whisky is the usual spelling in Britain and whiskey in the U.S.) called the Irish Fiddler. I have never tasted whiskey before and I started well, I dare say.

We tasted two varieties of whiskey and with the fresh oysters it tasted really special. I think the particularity of this experience laid in a very pleasant combination of warm, cordiality, music and taste. The more senses are engaged the better we remember. For me this was one of the long lasting experience because of that. Later that evening, when we got back from a dinner I met Bernadette- the fiddler- and Alan- the owner’s son. We were sitting in a bar until late, chatting about music, family traditions, the local customs and some of our travels. There was no rush, no running, no ‘being late’ feeling. Just sitting there, having our whiskey and cider, talking, laughing and thinking “Gosh, this is amazing, and will not happen again. Ever.”

The next day rainy and foggy weather was waiting for us. Despite the poor weather the surrounding of the hotel is marvelous. And so it is the near bay. When I got down all fireplaces were already warm. I met Martina- the hotel manager- who told me the story of turf used as a heating fuel. The turf is collected all over Ireland and it comes in handy little pieces. Normally, after the turf is collected it dries for couple of weeks before it is used in a fireplace. This year, however, which was extremely warm and scanty rainfall the turf was dried in 2 weeks. It fires in a second- when properly dried- and gives nice warm. Martina and me and my morning coffee in a drawing room

We had a lazy breakfast in a beautiful dining room with view over the garden and the bay. We had a short but very interesting conversation about the Irish funeral customs with our Irish guide. She said that in Connemara and Galway where she comes from people are still very attached to keeping the death person at home for a while to say a proper goodbye. Neighbors, friends and family members come to pay their respect. The funeral is just after that, at the local graveyard where the whole local history is immortalized.

Because of warm, tasty food and cordiality of the owners nobody was interested in leaving, really. Cosiness of this place is outstanding. I really wish to get back to Zetland some day. I would love to see it in a beautiful weather, eating breakfast in the garden and watching the bay.

Next episode of this story is here.