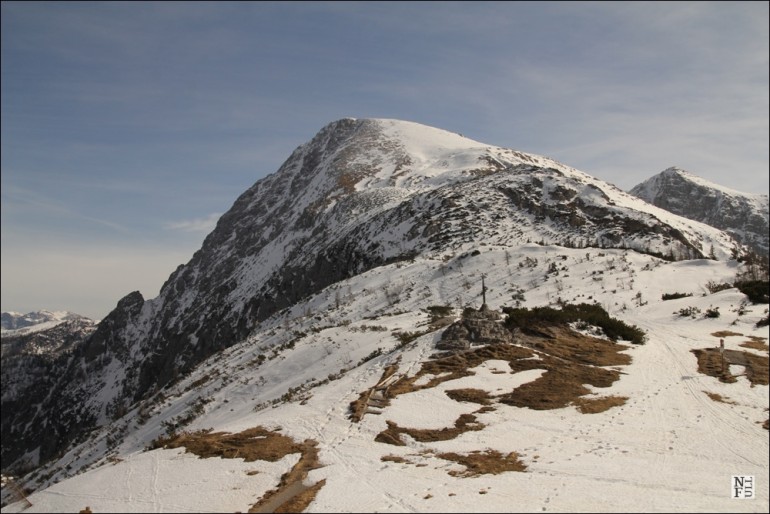 This was an awesome conclusion of my trekking spring: a one day hike in the German Alps with my friend. Needless to say the weather was marvelous, however, not everything went as smoothly as we planed. The start was pretty comfortable with excellent German facilities namely: parking lot WITH coins exchange (!) and ATM (!) on site! This is only possible in Germany, as far as I’m concerned. Mythical German organization appeared in its whole glory.

The basic idea was to have a look at the Königssee (ang. King’s Lake) from high altitude and to do that we had a plan to go up in a cable railway first and climb a nearby summit called Schneibstein (2276 masl) afterwards. The plan was simple, we set up in the early morning and after a 2h drive from Munich we met the first obstacle: a lady at the cash desk of Jennerbahn (a cable railway). Not that I am prejudiced towards ladies working in such facilities but this time it was really classic! She refused to sell us a one way ticket up saying that the path towards  Schneibstein and Carl-von-Stahl hut was impossible to cross. We could only buy a half way ticket and we did so. And that was the first thing that made our day and the route really really long. No worries, though. Starting from the middle of the track we enjoyed a spring weather: +18C, sun and green grass all over the place. The sun was shining for the rest of the day but green grass became covered with snow really soon. So for almost 2 hours we’d been walking through Strubalm valley trudging up in deep snow, falling down up to our waists from time to time. If you start to laugh every time you fell you quickly become pretty tired so not only the trail was long but also considerably engaging. There should be a mountain hut waiting up there after about 2h walk but it was closed. Bad luck again but we were in such a good mood it didn’t make any difference. Instead of an open hut we met a local trekker who looked like a professional sherpa (I swear he did!) and he told us about another mountain hut called Carl-von-Stahl (1736 masl) located just at the border with Austria. 5 minutes walk. Fine. Before we arrived to this hut we sat for a while in front of the closed one that I can’t remember the name of and watched skiers who were skiing down the Schneibstein with amazing speed (so jealous!). It was high enough to enjoy amazing view towards west with the majestic Watzmann massif as background. After a short walk we reached a saddle where  Carl-von-Stahl hut was located. The view on the Austrian part of the Alps and Schneibstein was awesome. But by the time we got to the hut we knew we won’t be able to climb it. Obviously trekking without any summit reached feels somehow incomplete so after a short discussion we thought it might be a good idea to climb at least Jenner summit (1.874 masl). Crossing the ski piste we safely arrived to the cable railway (I wonder what a lady from the cash desk would say if she knew we crossed it!) and went directly to the peak. And it was so beautiful! The lake was there and although it was shadowed by the Watzmann range it was still amazingly appealing. Just as everyone says: reaching the summit is only a half way down so after a while we had to get going. This was fast. And tough at the same time. We picked up alternative route down and soon got to cross the snowy fields sinking up again. At some point we would just running down like mad through these fields until we reached the green grass again. The deep winter in Strubalm valley we crossed that morning was a fairy tale like place but it was also by far the longest route to the Schneibstein and because of our lost battle with a lady in Jennerbahn we had no chances to reach it. I guess we traded the achievements for the beauty this time. And I am quite happy about it. We were both smiling when we finally reached the car left in Schönau am Königssee and we are pretty determined to cross the mythical 2200 masl next time.