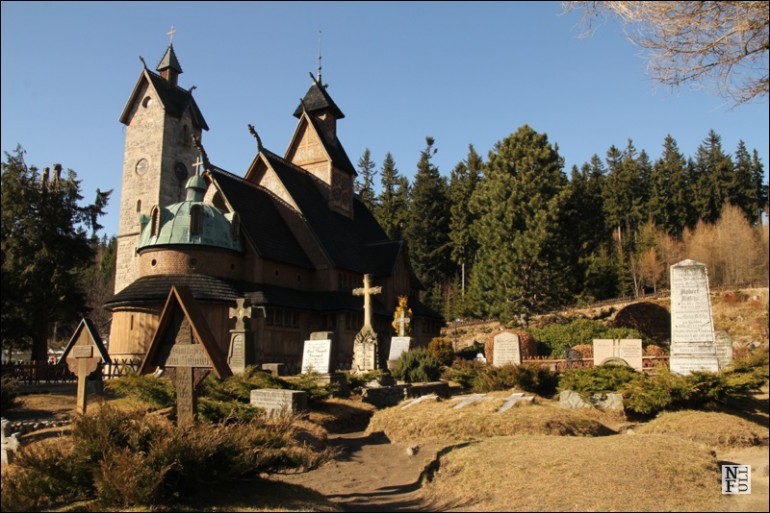 Wang Church is the main touristic attraction of a little mountain village Karpacz. It is situated in southern Poland just at the foot of an old mountain range Karkonosze. This whole place is way off the beaten track of foreign tourists and hikers and I bet that most of you have never heard about it. Continuing my story of a week spent on hiking there this spring let me tell you few things about this church.

This church is extraordinary: not only very old but also originally Norwegian. Surprised? I think most people are. Especially if you think how few of these churches last until today in Norway! It was constructed in 12th century in a small norwegian village called Vang from where it took its name (Wang in Polish). The history of this little wooden church until 19th century was pretty straightforward: it stood where it was constructed and served the local community for worship purposes. But then, in 19th century, something went differently than the ordinary. It was too small for the community and it was decided to be relocated so it could be used somewhere else. To make a long story short the edifice was taken to pieces and shipped in boxes, first to Szczecin, then transported to Berlin and finally reconstructed in Karpacz (in 1849). Apart of being an important touristic attraction in the area it is used by the local Lutherans until today. There are many curious details of this outstanding piece of architecture, like as it was constructed without a single nail, which is so hard to believe! Most of all, however, it is striking how different it is when compared with all other buildings in the area. It is bizarre. Even though the traditional houses around are also wooden these norwegian architectural details (lions, winged dragons, runes) are striking. It is carefully crafted and very well conserved so this is quite a treat for fans of norwegian architecture. If you are interested in norwegian architecture check this post by Jeff. He goes in depth of these marvelous constructions. What I love the most about this church is its smell. It is very special for two reasons: its age and my memories. As the construction is out of norwegian pine and the elements lasted for about 8 centuries the smell is very particular and – obviously – hard to describe. Try to think about old wooden buildings, like a mill or a barn. All years passed, all violent seasons’ change, everything marked it so the current smell consists of impossible to identify ingredients. For me it was also very special because it reminded me my childhood. It is an amazingly powerful experience: to smell the same smell after 25 years. Literally! THE SAME! 25 years is nothing when compared to 8 centuries so it hasn’t changed a bit! If you are curious what is the smell of the Wang church you need to visit it for yourself!

Photo gallery from Karkonosze is here.