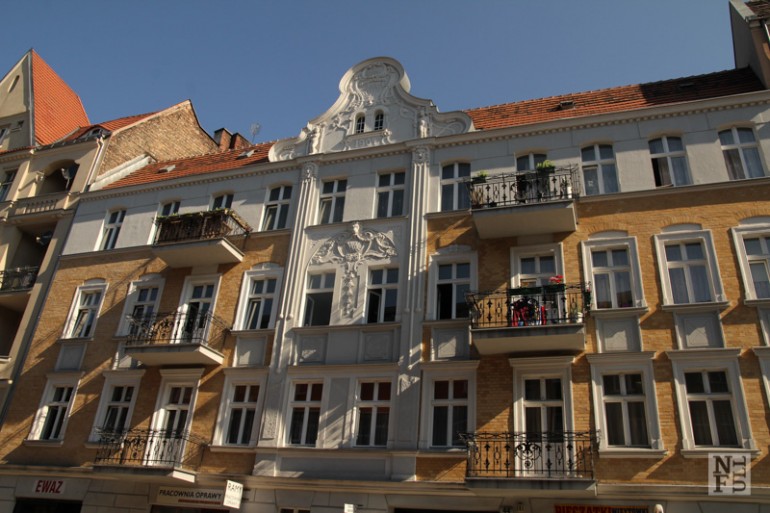 Architecture in Poznan is far from trivial. Despite the devastating World War II there is number of interesting buildings spread throughout the city. My favorite style of the city houses is art nouveau found in one of the city districts: Jeżyce. Not as magnificent as buildings in Barcelona, Paris or Brussels it is still fascinating to walk around this area and know the history behind it. It all started with a flood in 1888 which, causing a considerable damage of the ancient fortifications, convinced the authorities to expand the city towards the west. In a place where today you find a vibrant city there were small villages only 120 years ago! What I find most striking was a tight tie with Berlin that is so clearly visible in architecture of these times! Back then, Poznan was under Prussian rule (1793–1918) with authority in Berlin. All buildings, streets squares and avenues were conceptually driven by the mainstream trends from Berlin rather than Warsaw. Architectural style of art nouveau introduced in Poznan had few particular features. The houses were bigger than previously constructed in the city center but in terms of internal division of space it did not change significantly. The main characteristics of art nouveau is found in rich decorations of facade, stained glass windows, abundant stucco and excessive usage of floral motifs. Also oval windows were a novelty and beautifully crafted balcony railings. A fairytale like elements were introduced in all newly constructed buildings, which were numerous. In late 19th century construction sites popped up like mushrooms after a few days of rain. As many as over 800 planning permissions were issued and within next few years wonderful and stylish houses were constructed.

Here is something extra for you: Poznan seen by a foreigners. An Australian family visited Poznan and here is what they found interesting in our city! Jezyce might not be a touristic center of Poznan, however, it is heavily used by the locals. So if you wonder how is life of the local people you should walk around this area. Here is my itinerary of one sunny early morning I spent in Poznan. Quite naturally just like very other city district Jezyce has its own problems. Heavy traffic, lack of parking space and city noise are only few of them. Nevertheless, this area has amazing charm and beauty. If you come here in early morning, walk around and look up you will connect with the past of this city. Watching newly renovated houses but also the ones that were less fortunate and show a visible damage you will think about the difficult history of this place. Some of the details found in the streets of Jezyce are stunning. There are some good cafes to sit in too. A recent revival of cafes along Szamarzewskiego street is worthy to pay a visit. Also an interesting one is called Sweet Surrender and is found at Krasińskiego Street, just behind a theater building. A perfect place to play chess with your friends! Every fan of art nouveau will find this place delightful! Far from crowded touristic spots there is a very unique and interesting piece of modern architecture. This is just perfect for a lazy morning walk and a photo tour!