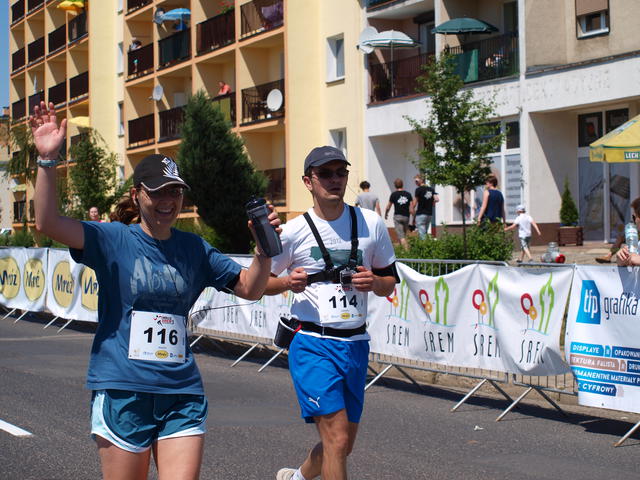 I have never thought I will write this: I completed a half marathon! And I feel great abut it. It’s not that it was always my dream or something. At some point my regular running has naturally turned into a challenge. I spent 3 months on training with large gaps in between, I must admit. But today here I am: I have officially joined a club of runners.

What is the story here?

Well, it all starts and ends with travels here! And obviously light jogging I started 5 years ago was caused by a plan of autumn trip to Lapland. I enjoyed both very much: preparations and travel. And so I decided to continue the training. At first it was only for pleasure and for getting fit. Later it became a powerful regulator of my daily routine.

Many people say that they find it difficult to run regularly but there is an awesome trick for that: you need to repeat an action for 21 days in a row to turn it into a habit. 21 days is bloody long but if you endure then after that everything is much easy! You can’t run long distances everyday so you need to start either with slightly short distances or wait a bit longer until your body will get used to it.

For many reasons. First, I am lousy in sprints ;-) I shared my 15 reasons why I do jogging here and I must say it is pretty much the same after over a year.

You can obviously limit your running to a daily routine, do it alone and enjoy long term results in solitude. In fact, I was doing it for a long time. And although I had no motivational problems my running was somehow frozen. At some point I was running my favorite distance of 6 km and haven’t been doing anything else. Endurance and fitness is being built through progress in distance and speed not by doing the same thing over and over again. The day you’ll run a half or full marathon with hundreds of other athletes you will understand why this is so cool.

What is the difficulty?

Just recently I met a marvelous person who is skilled and experienced runner (ciao Maurizio!). He told me that there are 3 basic elements that decide whether you will complete the marathon or not: your physical condition, nutrition and mental status. Of these three mental status seems to play a crucial part. It all happens in your head! And long distance running is simply for tough guys! Maurizio completed over 10 marathons, 3 ultra marathons (100 km long) and just recently a 202 km run so I guess he knows what he’s talking about.

3 best things about half marathon…

The best thing about it was a local community gathered along the route. It was touching when habitants of small villages were greeting the runners, creating a drizzle with their garden hoses, clapping their hands and shouting loudly: “You can do it!!!” Awesome!

Other runners were the second best thing about this marathon. There was no aggressive competition at all. Rather a smooth cooperation to cross the finish line. I enjoyed short dialogues with other runners and smiles exchanged along the way.

I felt great about my training and I finally fully appreciated my regular effort. It was the last fantastic thing about this run! I completed it not excessively tired nor exhausted and it made me really proud of myself.

The weather was absolutely terrible! From one day to another it has completely changed and I had no time to get used to the heat. For the Italians +30C might not the warmest temperature but since I live in the north it was to me! And believe me: the further I run the warmer it became.

Second thing I hated was the time of start. It was 10:00 instead of 9:00 or even 8:30! With +30C degrees the earlier the better but unfortunately this was not the case. And because of the heat the last 5 km were tough.

And lastly the track of this half marathon was a bit hilly. Too many ups and downs drained my strengths. All in all, however, this was a totally awesome experience and I can’t wait the full marathon this autumn! The one in Poznan sounds really tempting! I’m sure that half of my problems are already cut away: there is no chances for a warm weather in October in Poland. It should be nice and cold and this sounds already really good. Besides the time of start is as early as 9:00 a.m. which is just perfect!

I would like to thank everybody who believed and supported me throughout the whole preparation time, at the marathon day and who were happy enough about my success to like my pics on FB. You are fabulous guys! Thanks for being with me!

Straight away a half marathon completed I enrolled myself to participate in full marathon in Poznan. It’s a 15th edition this year with fantastic track throughout the city. Marathon in Poznan has a relatively short history but this is an important event that people are used to. It is currently a mass events, gathering almost 10 000 runners from all over the world. October the 12th, 2014 I’m going to be at the start line of this run. Where else I should run a marathon if not in my Home City?

This is not the only sport event that is being organized in Poznan every year! In fact, there are many more. Few weeks ago a Enea Poznań Triathlon took place. This September a new event called Poznań Business Run takes place. We’re looking forward to it! Especially that this sport event involves collecting money for charity. Lastly, Wings For Live another initiative that gathers athletes to help less fortunate folks.