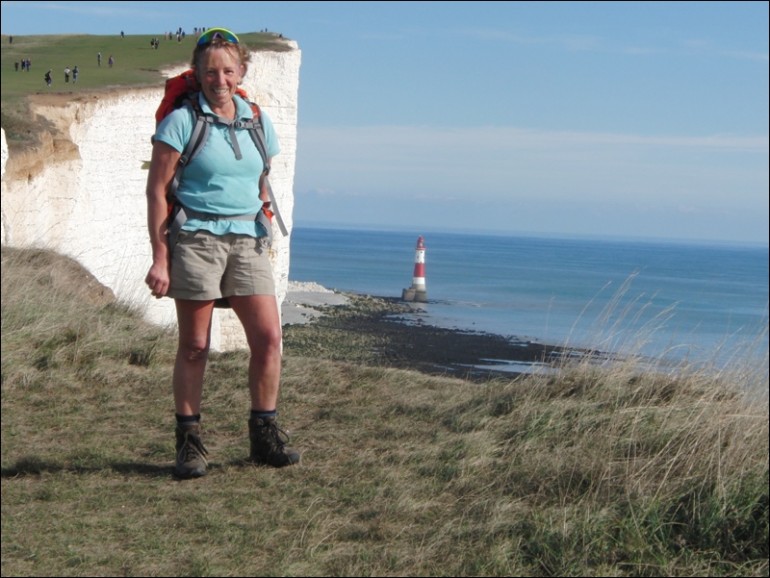 Here is another inspiring woman! Meet Jenny and her dog Holly. To rise the money for a local charity Jenny walked amazing distance of 100 miles! I think she made her point and I find her determination inspiring. Right after I completed a full marathon I got known that Jenny walked 4 marathons in only 4 consecutive days. So let me congratulate to Jenny and please read her story below.

I’ve just finished a challenge to trek the South Downs Way across southern England in four days.  To say that I am as stiff as the Tin Man from the Wizard of Oz is no exaggeration!  The South Downs Way runs from the cathedral city of Winchester in Hampshire all the way to Eastbourne in East Sussex.  It’s 100 miles long over rolling countryside, escarpments and finally beautiful white chalk cliffs. The English countryside, the UK

Why would anyone walk four marathons in four days?

To complete the South Downs Way in four days meant walking almost a marathon distance (26 miles) each day – but adding in ascents and descents which makes it feel a lot longer!  I did it because I was raising money for my local charity, The Iris Trust.

What did I see along the way on the first day?

Well, the South Downs Way changes all the time!  Setting out from Winchester where there is a statue to King Alfred (who allegedly burnt the cakes), it’s a gentle, undulating rise through the rolling hills of Hampshire.  Passing up and around Beacon Hill, and on to Old Winchester Hill where there is an amazing old hill fort and many bronze age burial sites.  You can still see the ground structure quite clearly.  The third hill in this first section is Butser Hill where the views stretch right out across the Isle of Wight to the South and down to the pretty village of East Meon to the North. A Mixure of Roman Ruins and Shin Splints!

Day Two started out from the Queen Elizabeth Country Park – where many people come for a day’s walking and mountain biking.  There are lots of special jumps and trails made throughout this beautifully wooded landscape.  This was a day of quintessential English countryside; harvested fields, hawks, hills and gentle moors.  The views were amazing all the way.  As I passed Bignor Hill there were more ancient remains, this time Roman, and a fun stone step – Toby’s Stone – which commemorates one of the 19th Century’s leading huntsman of the area.  By this time my joints were starting to feel the effects of the flints and chalk stones underfoot.  Although I have great boots – Meindl – your feet and legs are rocking around all the time when you’re sliding on flints.  I had forgotten how hard that is on the shin splints – and I wasn’t even half way through! Above Cuckmere Haven with Holly

ON the third day I left lovely Holly behind (Holly is Jenny’s dog).  I knew I was in for a fair amount of rain on one of the most exposed stretches of the South Downs Way.  That’s the interesting thing; the further along you go East, the more exposed you are.  I started out of the quaint village of Amberley very early to avoid as much as I could, and made it past Chanctonbury Ring (known for witchcraft and all sorts of shenanigans) but I could see the black clouds catching me up.  Before I got to the Devil’s Dyke – a beautiful bowl with fabulous views to the coast – it came down in a thunderous shower.  Sadly I saw very little of the Devil’s Dyke because the rain was so hard my head was down battling along.  Have to confess that at this point I wasn’t sure at all that I would make it!!  But finally the sun came out, and the day finished with a bright blue – but cooler – sky.  Ditchling Beacon hove into view and I was very, very glad to see my taxi waiting for me!

The final leg from Ditchling to Eastbourne is probably the hardest.  Not just because you are tired, but because it is constantly up and down, and quite steeply in places such as the Seven Sisters.

But you can’t complain on an October day when its warm enough for you to still be in shorts and a t-shirt and the sun is beating down.  This was really the first day I saw any people and by the time I reached the Seven Sisters around midday it was positively heaving with folks out to walk one of the most famous stretches of the Way.  But poor Holly had had enough by the time we reached the cliffs.  The combination of the strangeness of the height, the humidity in the dips beneath the cliffs all got too much for her and I had to carry her for a couple of miles to the Birling Gap where she stayed for the rest of the day while I finished. On butser hill with Holly

Around 5pm, tired, sore, really very very tired, I finally arrived at Beachy Head from where it is only a mile into Eastbourne.  Beachy Head is sadly very famous as a place where people come to commit suicide and there are rows of little crosses commemorating them.  But it is also one of the most beautiful views and spots in the South, and I was very glad to see that little lighthouse!

I’m not sure I would do it again in the same way.  I now understand why there is  a raging debate between Thru-Hikers and Hikers in the US.  It’s true – the pressure of distance and time takes away a lot of the benefits you get from being surrounded by nature.  There were times I was simply too challenged and tired to stop to take a picture – just aware of one more step, running out of time, one more mile.

I’m pleased with myself, and very proud of little Holly, but happy to say goodbye to the South Downs for the Winter season!

If you wish to follow Jenny and her challenges this is where you can find her: