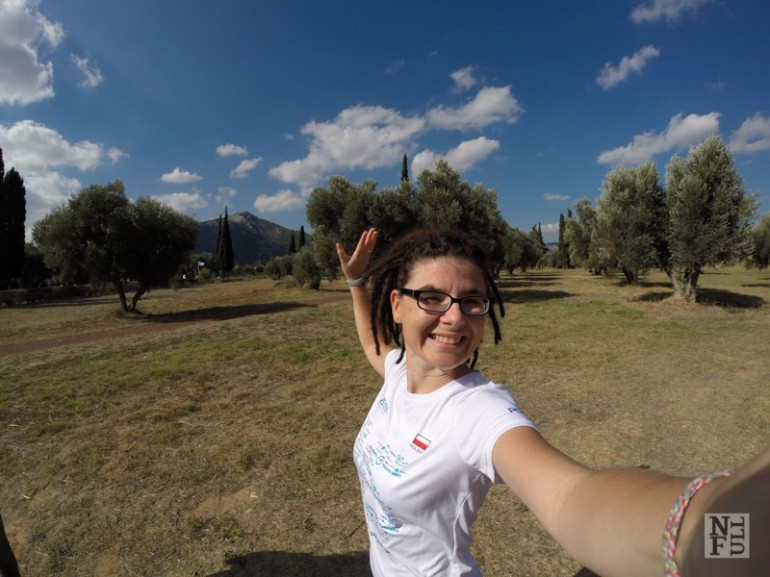 Ladies and gentlemen! From now on I am officially a marathon runner!

And here is how I did it.

As you well remember I completed a half – marathon last June. I continued the training throughout the summer and was pretty well prepared before the main run. On Sunday, October 12, I was at the starting line of the 15th Poznań Marathon. The excitement just before the start was all over the place. Over 7,000 runners were squeezed in one of the main streets of the city. Every participant had a number on his T-shirt and smile on his face. Some runners were already running well before the official beginning, warming up, laying down, drinking water, covering their body with a plastic bag (I was told it was a good way to warm up), listening to the music, discussing strategy with a stranger: it looked like a huge and very busy crowd.

Finally, the race began. It took me almost 5 minutes to even cross a start line! Slowly, the street was less and less crowded and each of runners could find a space and rhythm. At 6th kilometer there was a very attractive thing to do: we all run across the football stadium!

First 10 km were just fine. Until a well known to all runners guest came: Mr Crisis.

It is still not clear to me what mistake I made. I suddenly realized how hard I was breathing, I couldn’t find my favorite pace and before 14th kilometer started I felt completely exhausted. The music on my mp3 didn’t do any good and I felt confused and angry. It was so bad I thought about quitting.

For next 10 kilometers! A real struggle. Eventually, I switched the music off and using my recent experience from camino I focused on the nearest kilometer. 6 minutes and 40 seconds, 1000 meters – this was a distance I was able to focus on. And it finally helped me to find my pace.

Until another well known element of each long distance run occurred: pain.

After crossing the important point of 21km, which is half of the marathon distance and before reaching another important milestone of 30 km my joints and muscles were hurting quite badly. I stopped once to get help from medic he was kind enough to spray my knees and kill the pain. For a while, at least. What a relief! Slowly, however, every inch of my body hurt. And it was even worse when I stopped! So the only way to deal with this pain was to continue the run!

By the time of half distance all runners were helping each other: positives messages were flying around. “You can do it! It’s not that far! The finish line is just around the corner.” And my favorite banner carried by the fans was saying: “And you could have chosen chess!“.

Well, I could have but I didn’t. And so I was running. I had two amazing men with me: my husband and my dad. At some point their encouragement was the only thing I could stick to. We run this marathon together and this was a real team work.

After over 5 hours I finally crossed a finish line. I was crying like a baby out of joy I finally made it! The mixture of exhaustion, proud, joy, excitement, surprise and satisfaction was fantastic! There is nothing in this world to be compared with the emotion of crossing a finish line of your first marathon run!

The very same day I could hardly walk. The day after was similar. But after 48h I was feeling great again. So what am I going to do now is to run a marathon in 2015! You didn’t have any doubts, did you? This poor quality picture was taken right after crossing the finish line. So proud!

Marathon. The Real One!

A conclusion of my marathon story was epic: 10 days after I completed my first ever marathon I went to Greece. To a small village called Marathon, to be precise. It is situated about 40 km from Athens and it is a mythical place of a great battle between Greeks and Persians. I went to Marathon with an Association of  Licensed Tourist Guides kindly arranged by the Tbex team. This was a guided tour that took us first to the Marathon battle fields, then to the Marathon Museum and eventually to the beach and very tasty lunch. The weather was excellent and we had a lovely time. The Battle of Marathon was a historical event but it became later a theme for various myths and legends. Apart of its military importance and crucial role in defending Athens Marathon is especially known for a legend of Pheidippides. He is said to have run from Marathon to Athens in full military outfit to share the news about the Athenian victory. Just as all marathon runners I was aware of this exhausting run ended with death of the runner but it was new to me to know that he run in with full equipment which, at that time, was heavy and very uncomfortable.

He run with his shield which was extremely heavy not to be seen from a distance and not to be considered a coward. In order to fulfill his duty he run in extreme heat with full armament. Although there are two legends mixed here and nothing is certain thinking about it is uplifting. Human bravery, dedication and determination is something that touches me deeply. And as a marathon runner I know more about than I used to. Jenny who was with me and who recently completed 4 marathons described the story in profound so if you are interested in hearing more about Battle for Marathon click here. Me and Jenny – two marathon runners – in Marathon