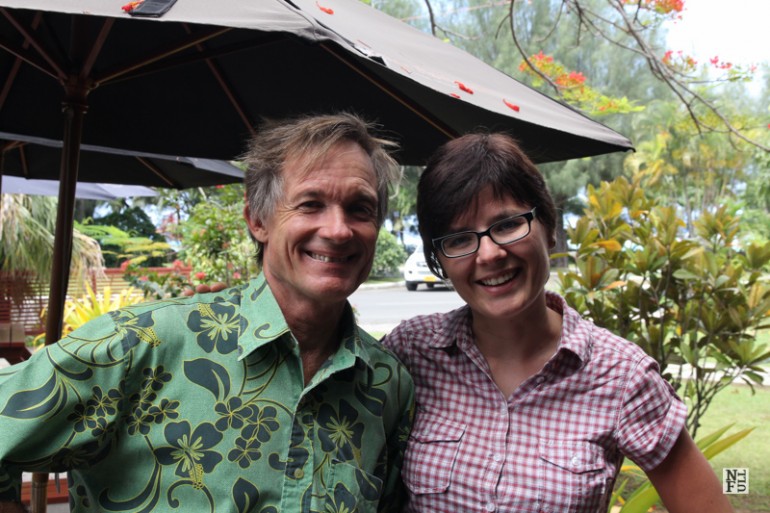 You would be surprised what kind of people you can meet on Rarotonga! At first, it seemed like the end of the world. A paradise like island isolated from all other countries. Soon, I realised how wrong I were.

The most unexpected person I met on the island was Tim. His story was a blast! There is nothing special of being a Brit, born in Manchester and moved to New Zealand with his parents. Not even his career as a lawyer and his decision to settle on Rarotonga. But his love to trains, so powerful that brought a real steam train to the island. And this is somehow understandable, you may say. Well, a man with passion. True, but the train he transported to Rarotonga comes from a place where I live. And this coincidence made us both laugh! Rarotonga is beautiful! And Tim agrees.

Tim is an excellent storyteller so when we met over lunch in Salsa Cafe I wished that day would never end. He started his story from Napoleon Wars in Europe just to explain the connection between his client and a small estate in Poland he inherited. To have a careful look at the estate he went to Poland and BANG! there he saw it: trains for sale. It was the beginning of the 90. in Poland and as a result of serious political changes (a switch from communist regime towards democracy) many of previously state owned properties and other goods were for sale. It happened that Tim’s client knew about his love to trains and so after he saw a steam train for sale he phoned Tim and asked if he wanted to buy one.

He had also a free space in a container and so they could split the costs of shipping it from Europe. Tim had little money saved and soon they arranged the whole thing. He bought an old steam train that was still in a good shape and he planed to open a short railway road on Rarotonga as a tourist attraction.

The train arrived to Rarotonga and Tim spent another 10 years renovating it! A dedication is the right word to describe what he did. Eventually, the train was fully operational but unfortunately the investment in railroad was not that successful. Years have passed when Tim realised he has no more time nor money to proceed with his daring idea so when a friend from New Zealand approached him asking to get the train out of the island he agreed. Although beaches are great Tim has recently moved inland.

In next 6 months the train will be transported from Rarotonga to New Zealand where it will be a tourist attraction near Lake Wanaka. Luckily when Tim was working on this train he had all controls done by a New Zealand office so after all his train is fit and ready to ride in New Zealand with all formal conditions filled.

Tim’s story was epic. I listened to it with my jaws dropped. To find a person who visited and liked my country was unbelievable enough but to find out there is a steam train that I probably rode in as a kid as far away as on the Cook Islands was mind blowing. Although Tim’s story has a bitter – sweat end it shows few important things. First, that there are no limits for imagination, then, that where you really want something to happen and you are determined enough there is a high probability it will happen. And when you are travelling you should be prepared for amazing things.

This is probably my favourite part of travels: meeting people who share their stories with me. Sitting in that cafe on Rarotonga and listening to a story told by Tim was something I could never planed nor even think of. But it happened for real. And for such moments I am ready to travel. Just to discover the connections between places and people. And to understand more even if it is very little.