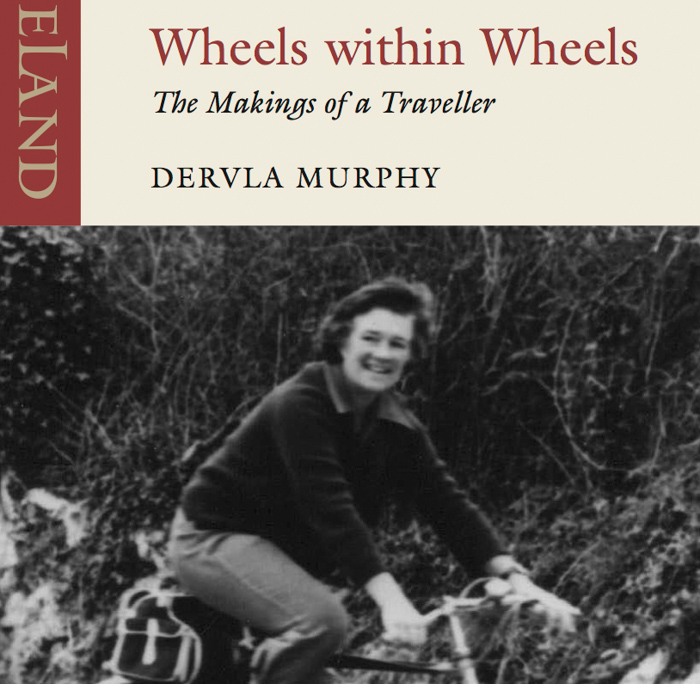 I’ve been reading travel books by Dervla Murphy for quite some time now. I started in  chronological order with “Full Tilt” followed by “Tibetan Foothold“. The books  were a sort of novelty to me. I have never read anything so sincere, straightforward and honest. I was fascinated by her style and stories so when I received Dervla Murphy’s biography from Eland I started reading it right away. Here is why you should read “Wheels within Wheels“, too.

It always amazes me how well people remember their childhood and how deep the events and emotions are hidden in our memory. “Wheels within Wheels” is a memorable journey in time.  The author invites us to follow her footsteps in her early years, to explore the history of her family and to discover the nature of relationships with close relatives. It all started in Ireland, before the 2nd world war, when three of them – mother, father and little Dervla – move into a small village Lismore. A remote location in rural Ireland with a beautiful landscape in the background which shaped Dervla’s personality and habits more than anything else. Except, perhaps, her mother’s illness and both parents’ love for books.

There is also a particular detail in Dervla Murphy’s biography that I find very powerful. My Mum, just like her mum, is disabled and thus my childhood has been influenced by caring for her. Although my Mum has been more independent than Dervla’s mother  it still influenced me and who I am today. Caring for somebody else, thinking about somebody else’s need and just getting the focus away from myself was my daily routine. I had a beautiful childhood irrespectively of my Mum’s condition, but I see many similarities between myself and the author.

I found it particularly interesting that an Irish girl, with no formal education, possessed such a curiosity for  other places, cultures, and languages, such a vivid imagination and, at the same time, her actions were characterized to a great extent by common sense. Her childhood in rural Ireland honed her material needs to a minimum which allowed her to travel the world in a very particular way. I hadn’t realized earlier that she stayed with her mother until the very end and only after her death Dervla’s plans to travel the world were realized. Enough to say she was thirty by then. When she finally began her first journey into the unknown, she felt the need to know the world quite urgently. And it was possible because one day her parents gave her a bike. It was love at first sight and soon, even though restrained by the home duties, she ventured out on bike trips. Every time she went further and further until she realized that there was no reason why she shouldn’t cycle wherever she wanted – even to India. Young Dervla Murphy and her bike

It is fascinating to learn about her childhood and the way she was learnt about the world through books. Her father was librarian and grandfather a scholar so although she didn’t finish  school due to the hardship within her family, these two men influenced her greatly. Reading every book she found was her way of keeping her mind open, exercising her imagination, and in some years marked by extreme difficulties reading books also kept her sane.

This biography is a wonderful testimony that family matters and it marks us to an extent we would never imagine. It shows the author’s ups and downs, fulfilling friendships and school failure, ethical and religious dilemmas, and the everyday struggle to keep her spirits high. Furthermore, the book helps to understand that for Dervla the journey was not only just travelling around, discovering new countries or even talking to the people she met and sharing their reality for a while. It was a deep human activity she undertook out of a need to realize her dream and to fully develop what she believed she was called for. Typically for Dervla her difficult road towards independence in her own words was summarized as follows: “The school was hard, but the knowledge was priceless.” No regrets, no bitterness, no fuss. In her life, everything that should have happened, did happen. And it all made her an amazing person she is today. Dervla, her bike and some locals.

Dervla Murphy traveled the world on her bike. You might think that through her journeys she became knowledgeable and smart but I think, who she is today, is derived from her difficult childhood and obstacles she was confronted with. She was smart before she ever started traveling. And her way of travelling is a result of who she is. Not the other way around. There is one certain thing about Dervla Murphy and her biography: they are characterized by sincerity and integrity, so precious and so rare nowadays. Apparently, formal education is not everything. My biggest regret after reading this book is the missing part of the second half of Dervla’s life. I would be very interested in what happened after her success, how did this change her life, whether she likes meeting her audience and how the international recognition influenced her traveling. Dear Dervla, if you are reading it part two, please!