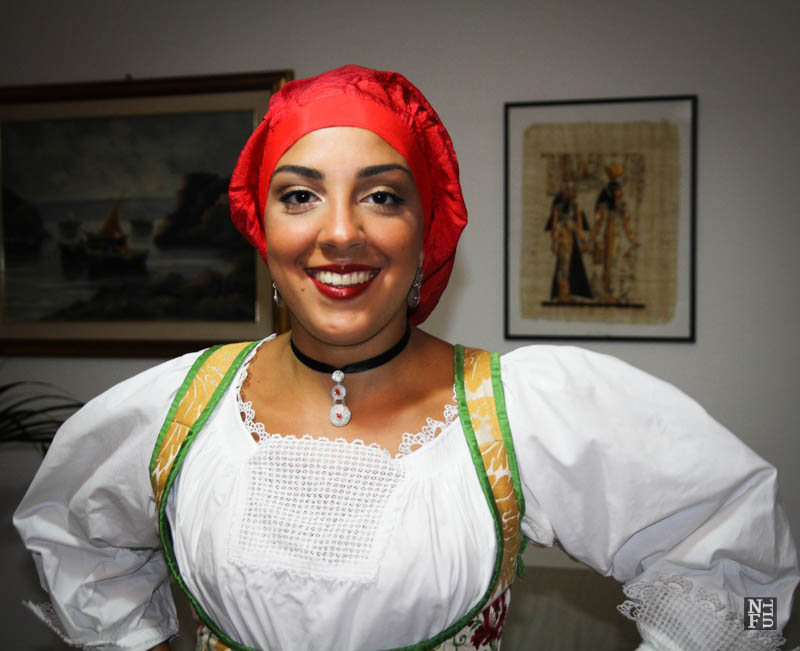 Yesterday was a very special day. Although it was terribly hot due to a circulation switch and I felt really weak, I went to a meeting with Maria Paola. A young girl who is a member of the local folk group. She is the owner of an old traditional costume that belonged to her grandmother and she invited me to join the dressing. Her folk group had an evening performance in Buggerru – a nearby town along to other 15 folk groups from the region. They performed not only a parade but also traditional group dance. Her house is only a few minutes from my apartment, but even such a short walk end up with wet t-shirt caused by unnatural heat and humidity. I could hardly imagine a person who dresses these layers of traditional costume one after another in this weather.

The apartment of Maria Paola’s family is like a local museum – they keep all family treasures, like porcelain, furniture, portraits and even the costume original buttons. When I entered the room I was greeted by the whole family who got excited that a foreigner is interested in their traditions. I deeply appreciated the moment when I can meet people who are proud of their traditions and have this need of sharing it with the world. So there I was and my role was to listen, watch and try to understand.

Maria Paola is one of the most beautiful girls I have ever seen. Her typical Sardinian look fits not only the apartment and this context but most of all the costume. She had a makeup ready but felt the warmth too, so a big fan was brought to the drawing room and the process of dressing begun. She started from dressing a large white tunic that was more like a dress as it was large enough to cover her knees. This was an original piece of her grandmother clothes and it was made out of fine cotton and very particular lace on the neckline and the edges of the sleeves. After having this chemise on she got her shoes on too. This order seemed to be very clever since the rest of the dress is really heavy and it would be almost impossible to get her shoes after the skirt and apron. A very elegant pair of black shoes, similar to the flamenco dancers. Then, she dressed an old fashion underwear trousers and the first skirt. All of what she dressed was made of white cotton and she looked like figures in the old pictures already. While dressing next pieces of the traditional costume, she was explaining the purpose of each piece. The white skirt was giving an extra volume, a sort of corset was modelling her figure, slimming her waist and thanks to a sort of small pillow on the back it was holding the external skirt on place. Everything had a purpose Another smart feature was an additional piece in the circuit of her skirt and underskirt so when a girl was gaining weight or got pregnant she could still use the same robes just making it bigger. In the past, the costume was so expensive that the family bought it once in a lifetime, therefore it had to be flexible, to some extent and of the highest quality. The final four pieces of clothing were like a cherry on a cake. A colourful frilly skirt, jacket and a sort of shawl covered the white veil. Maria Paola methodically put one piece after another with a great care and attachment to the details. It was fascinating to watch how focused on the details her movements were. When she stood there in front of me fully dressed in this costume that was more than fifty years old I got amazed by the beauty of it. The final result was dashing. And what strikes me  even if this cloth was of traditional provenience it was very successful in extracting the natural beauty and the most beautiful female features.

I went and visite Maria Paola again, August 15th, to watch another costume. And the pictures below show the new costume made for her by the local tailor. The figure of Maria Paola, her face and movements were perfectly matched making her even more beautiful. Later in the evening we watched her folk group dancing at the nearby feast in Buggerru. Tiny steps, joyful music and wonderful choreography made the show incredibly attractive. The proud of these people out of their heritage was visible to everyone. And for a while I felt jealous and sad because the generation of my grandparents who survived the war had no such opportunity to pass my anything related to their clothing or dancing traditions. Their generation was robbed out of their heritage. The extreme poverty and death took the chance of passing anything to the next generation. And even if it’s been more than fifty years passed I am the third generation that suffers. All I knew about the past of my grandparents was a few stories of how tough their lives were. And that night when I watched Maria Paola dressing her grandmother costume I felt the sadness of the people from whom such privilege was taken away.

More about Sardinia is coming soon.