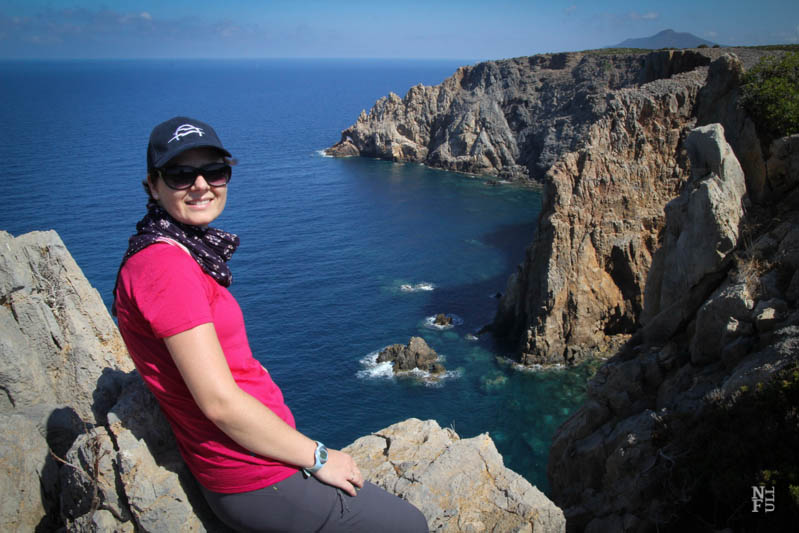 I haven’t considered Sardinia a trekking destination but when Cesare told me there are some fine paths I couldn’t resist taking with me my trekking equipment. He forgot how poorly I bare the heat and it became a serious matter in planning a one day trek from Grugua to Cala Domestica. We came with a super clever idea of taking the earliest bus of the day, which was 5:50 am. It was still dark when we walked down the street to the bus stop but during a short 20 minutes bus ride, the sun rose. The plan was straightforward: we walk as fast as we can in the morning to exploit the chill. The whole path was divided in a few parts of a very different landscapes: we started in the woods, walked down through the farm of Modigliani family, proceeded through the canyons and mine settlements to finally arrive at the beach called Cala Domestica. The final 4 km was a path along the coast with breathtaking views.

All went as planned. To some extent. We arrived at the beach before 10:00 am and I felt the heat has started. Not only all others were in their swimming suits which made me feel weird in long trousers and trekking shoes but also this was a very warm day. We also walked about 18 km in a very fast pace so I felt a bit tired. Perhaps a dress of Cesare made the situation slightly more interesting as he was dressed like a 19th-century entomologist. He had white long sleeve shirt, a weird hat, two backpacks and a long stick with a microphone to register the local bugs (crickets). Literally everybody was staring at us as we crossed the beach. To gain a bit of energy for the final stage, we had a cold drink at the bar. After a while, we pulled ourselves together and started walking again. The heat was vicious but despite this we had to climb up to about 70 meters above the sea level. The first part of the path was nicely marked so we walked it in no time, but then it all started. The map was inaccurate. The terrain was covered with rocks and a low vegetation full of spikes. There was no sign of the path and all we had, was our common sense and a clear bearing. We could almost see Buggerru, from where the bus should take us back home, so the only thing was to cross the rocky hills. It was a very rocky walk, up and down, up and down. Just like mountain goats we jumped from one rock to another.

The bus should leave Buggerru at 12:58 but half an hour before this moment we were still in the middle of nowhere. The panorama was breathtaking and I wished to enjoy it for a couple of minutes but the heat was squeezing out water from our bodies with no mercy and so we hurried up. I felt salt covering my body and a slight attack of panic. I could not bare the though of being late for this bus and staying for another 3 hours in the town waiting for the next one. So we started running. And the final 2 km we run like hell. Downhill, right to the middle of the town to catch the bus. I was exhausted! But we managed to catch the bus, go back home and lie down for the rest of the day.

Although Sardinia is a demanding terrain, I would like to encourage you to pursue an adventure here. It is warm and sunny in August but with good organizational skills you will enjoy unforgettable views here. A path along the coast was truly spectacular! Also, the breeze from the sea made the final kilometers bearable despite the noon heat. If you wish to find an original, not crowded, off the beaten track, fascinating and, above all, challenging terrain, Sardinia is the right place for you. Remember about taking a huge quantity of water with you or control the map and ask locals for the sources along the path. And start as early in the morning as possible. Alternatively, visit Sardinia in shoulder season. I’m pretty sure the locals will love you for doing this.