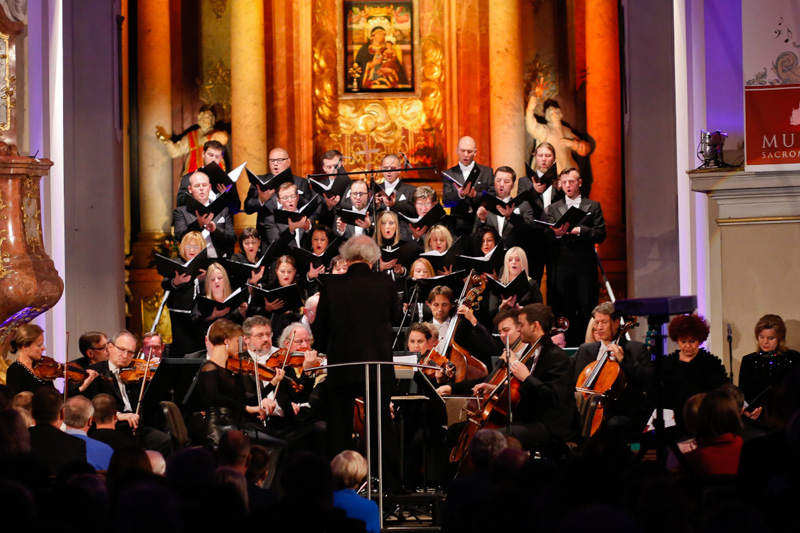 Music is an important element of the culture, no doubts about it. This is one of the reasons why I enjoy participating in various music festivals all over the world. The festival I’m introducing you to today is even more special: not only it promotes aesthetic values but most of all it protects the heritage of the region that I come from. This is also why this post is published under ‘Home City’ category rather than the general one.

This festival, called Musica Sacromontana, has been established only 10 years ago and there is an important motive behind. Let me start with a short description of the place, where the festival takes place.

The Basilique is run by the fathers of The Congregation of the Oratory of Saint Philip Neri and it is dated back the sixteenth century. The new sanctuary was approved by the bishop of Poznań then (Lubrański), and in the following centuries, the place played an important role in the life of the region, becoming a prominent center of the St. Mary worshiping and the musical archive. Making the long story short, this place of worship survived against the odds until the middle of the seventeenth century when the parish was given to the monks from the Congregation of St. Philip Neri, who has been known and still are, as the great supporters of music and liturgical songs.

The turbulent history of this place is fascinating to me mainly because it shows what my country and my region went through in the last 300 years. This was a tireless effort of the local aristocracy and ordinary people in supporting the construction of the church and the monastery. It was against the wars, conflicts, plagues and a variety of other adversities. I love reading about it because I like to believe that my ancestors were brave, wise and determined in order to establish a place to develop their culture and faith.

The disaster came with the Prussian Partition. The Prussians shut the place down.

Before the confiscate of the order in this place in 1876, the members of the congregation supported by the wealthy people of the region successfully collected an impressive archive of the musical works. The local library held a substantial collection of sacral music scripts of a great value. With the Prussian invasion, almost all of them got lost. Just as our favorite writer J.R.R. Tolkien says: “And some things that should not have been forgotten were lost“. It took almost 150 years until musicians and monks started recovering the scripts. It takes a huge effort and great organizational skills to search for the collection scattered in libraries throughout Europe.

The association called Stowarzyszenie Miłośników Muzyki Swiętogórskiej im. Józefa Zeidlera established about ten years ago runs a large-scale research in Polish ecclesiastical archives and European libraries in order to recover the scripts and scores and bring them back to Gostyń. Some of the pieces found are of a great value. Along this difficult research, a wonderful idea of a festival came to life. Every year the audience of this festival is privileged to listen to one of the recently found scores. The works of this association are especially focused on one of the composers connected with the place: Józef Zeidler. His concerts, litanies, vespers, and other works are examples of classical music of the highest level.

This is the reason why the association and the festival are of great importance to this area, the local culture and the history of the whole country. People who work in this association make an effort to save our heritage, or better say, the small pieces that were left. The festival Sacromontana has been enthusiastically received by the critics and throughout the years it was awarded by a variety of institutions in Poland and abroad (Srebrny Mikrofon Radia Merkury in 2007, Fryderyk in 2008 for The Best Album of Choral and Oratory Music, Les Orphées d’Or de l’Académie du Disque lyrique in 2015, and many others). Quite possibly you might think that the classical music is boring, and in worse case scenario, you might completely neglect it saying it is much too difficult to enjoy. I’m not going to argue it is otherwise. Indeed, to enjoy the classical music you need a certain background and experience.

This is the reason why you should come to this festival. Musica Sacromontana gives you a smooth introduction to classical music. If you have never listened to classical music before this it a very good place to start. The association makes an effort in preparing a well-balanced repertoire and the musicians invited are excellent. The music played in this concert was easy to listen. It all started with three pieces by Górecki, followed by a lovely Divertimento by Mozart and concluded with Mass D-dur by Zeidler. Don’t get discouraged by the fancy names! This music is full of harmony. You will find there some strong emotions, but the classical music makes them easy to understand and experience. It is very suggestive and powerful which guarantees an evening full of excitement.

Here is my advice: if you wish to listen to the classical concert played by the celebrities in an outstanding environment, Musica Sacromontana festival is the best place to start. There is a free entrance to all concerts and the festival is organized annually in the last weekend of September and the first weekend of October. Save the date!

I was lucky and I feel privileged: not only I lived in a big city with all cultural commodities but also my parents were smart enough to introduce these values to me in a very early age. For me, every concert of the classical music I listen to brings wonderful memories. I remember that an evening at the opera or a concert hall was a feast. We were all smartly dressed and good looking. We would leave for the concert hall well in advance to enjoy ourselves and wait with an excitement. The concerts were wonderful! As a child, I enjoyed immensely watching the conductor, the artists, and musicians. It was all very elegant and noble. For the people who spent their childhood in the communist regime, this was one of the very few moments to experience the beauty. Thus, even today, a beautiful music makes me emotional. And very happy.

Special thanks to father Jakub Przybylski COr, who kindly reviewed the draft version of this post and sent me precious comments.

Disclosure: All pictures are courtesy of the author. Paweł Maćkowiak, NETBOX.

All pictures from this event are here.