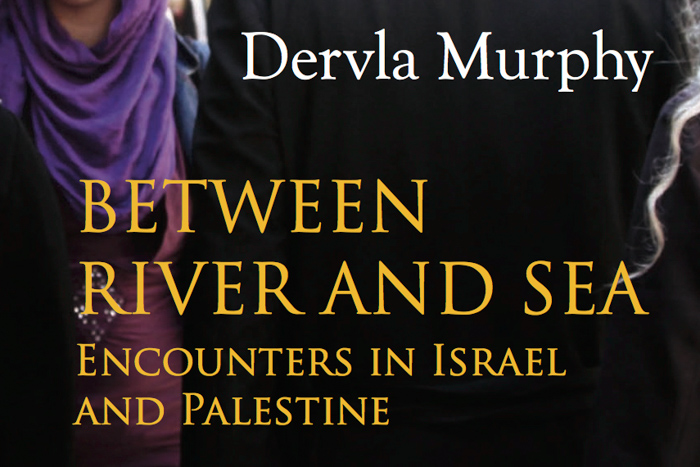 This is not a politically engaged post. I will not attempt to take sides regarding this conflict nor will I discuss the possible faults of those  involved. I will share, however, something that is important to me. This is my review of the recently published book by Dervla Murphy “Between River and Sea“,  focused on the Middle East conflict.

It’s just a book – I thought when I took it in my hand. There is no way it concerns me. I felt I was far removed from the Middle East and I have never visited any of the countries involved in the conflict nor have I had an intention to, but I started reading and quite quickly realized how wrong I was.

Dervla Murphy is a distinguished travel writer, an icon of independent traveling. Her life is an endless inspiration to all cyclists and serious travelers. In her late seventies and early eighties, she ventured into a difficult territory – a journey to Palestine and Israel.  “Between River and Sea” is her reflection on the conflict and although she has always been politically active in a variety of situations none of her previous books is as sharp, clear and on the edge of a political advocacy.

This post is not politically engaged, but Dervla’s book is. She states right from the very beginning that her heart is with the suffering Palestinians and against Zionism of any form. It might seem controversial to state your personal political views on the issue on the first page of the book, but I think this was wise – for a variety of reasons. Sooner or later the reader realizes the author’s views and if not revealed before, this can result in a loss of trust.  A declaration of belief frames the story and leaves no space for the unsaid.  People often state that they appreciate objectivity, but I sometimes find it hypocritical. Rarely, if at all, do authors and journalists make the effort to look at an issue from a variety of perspectives and I see no reason why people should avoid stating their opinions clearly. So don’t look for objectivity in Dervla’s book because you will not find it.

This book was hard to read and very hard to finish. It was heavy, deeply disturbing, sometimes cruel and very literal in the descriptions of harassment.  Page after page the author shows the misery of people who live in this region and what I found most difficult to deal with was their lack of hope for the future. The reality of war is horrible and we all know this, the population suffers, decade after decade. The hate grows and is passed from one generation to another.  Just like every other war the conflict between Israel and Palestine turns ordinary people into orphans, widows, widowers, and single parents. I don’t believe there is one person in the Middle East who is not affected by the loss of a relative or a friend. Living in fear destroys a healthy personality and turns children into a generation with no hope.

What is this have to do with me?

If you read this book it will hit you. Even if you thought you were well removed from this conflict, after reading this book you will find yourself in the middle of it. It’s because the cruelty of war leaves no one indifferent. If  you read about cruelty towards children you will become angry. If  you know about injustice, it can not be ignored. And, most of all, because the population of both Palestine and Israel are deeply marked with mutual mistrust, they need somebody from the outside to help them understand the situation. And to see hope where there is none.

Although I consider this book very important I don’t think it is helpful.

Don’t get me wrong. There was no way Dervla Murphy could have written this book differently. She did what she’s always done: meeting people, staying with them for a couple of days, asking difficult questions, and sympathizing with those affected most by poverty. When you are reading this book you get a feeling that the author becomes one of them, and while this is natural it results in seeing this life through their eyes only which can narrow the reader’s perspective.  It is beneficial for the book, but it does not get us any closer to the peace.  This book is excellent in showing the misery and the suffering of all residents of this land of fire. It should leave you uneasy.