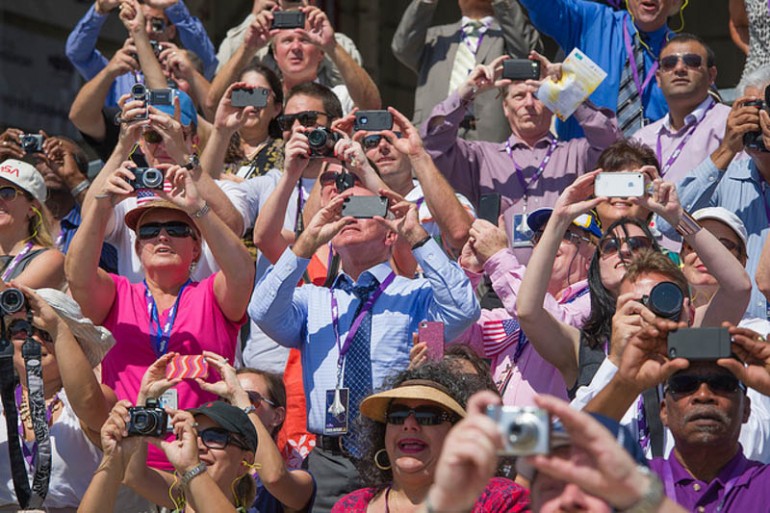 In previous posts of The Science of Travel series I explained a few important arguments and I also had a look at the evolution of mass tourism. This post is focused on visual consumption and one of the most widespread argument a traveler versus a tourist.

Before we discuss an issue of a traveler versus a tourist let’s focus on a very important problem of visual consumption. Along with the development of photography, the nature of travels has irreversibly changed. Until humans traveled because they were forced to do so (in search for food, new land, for commerce, out of curiosity or to discover faraway regions) and even in the age of Grand Tour, the travel was focused on a discourse. People who traveled talked or wrote about it, or quarrel about it, if you like, and made numerous attempts to described it, but they never could show the others what they saw. The widespread cheap cameras have changed it. Since more and more people could afford to travel and to photograph themselves in front of the popular sites, they could not only prove their presence in the important places but they also contributed to spread the views and incite anticipation. Through showing and watching the pictures, all famous sites lost their mystery. Literally ALL people know how the monument or a site looks like BEFORE they actually see it.

A popularization of cameras was a turning point. Instead of talking about the places people started showing the pictures. At the same time, they became visual consumers. In present times, it is mainly about watching, seeing, staring, and browsing, rather than just talking about it.

A traveler or a tourist?

Having said that we are all visual consumers, I shall point out that when science started considering tourism an important element of human life in the 70s, there was a consensus that we are all tourists. The group of tourists was, in major part, uniform and all tourists were treated in the same way. The early definition clearly stated that a tourist is a person who physically moves from one place to another with no obligation to do so. So far, so good. There were dozens of different categories within a group called tourists and I will share one below to illustrate the way science categorized people who travel. I am pretty sure that you will find one or more category you fill in. Here are four basic groups of tourists by Cohen (1974):

The first group consists of all people who prefer familiar surrounding and well-known rules. They are traveling with the travel agencies and stay in chain hotels. Such tourists are the perfect customers of the sea cruises. The Organized Mass Tourism is related to the phenomenon called Disneyization. Based on the famous Disney theme parks the science observes the tourism that instead of showing you a place it CREATES a place that you travel to. The tourist, instead of experiencing ‘the other’ is kept in the environmental bubble. These tourists travel far but they stay in the same familiar place.

The Individual Mass Tourist is pretty similar to the first group. They follow the mainstream travel destinations, visit most popular sites, consume them visually and they sometimes make an attempt to leave the bubble they live in. On the contrary to organized mass tourists, they sometimes leave the environmental bubble in order to experience something new. They keep, however, very close to the familiar surrounding so they could go back there if anything  unpleasant happens. Such tourist uses services of the travel agencies but he/she is not strictly assigned to a group and has a relative freedom of deciding what to do and where to go. The Explorers are people eager to meet ‘the other’, to switch their previous environment, to explore and to learn new things. They organize the trip themselves and they mix well-known travel destinations with off the beaten track sites. Although the explorers are eager to experience new and exotic things, they are not ready to completely abandon their habits. When they find a situation that challenges their habits and behaviors they go back to the previous safe environment. They have no intention to immerse into the host society. They also keep their basic needs as transportation and accommodation as familiar and reliable as possible. They visually consume a place, one after another, with no plan to stay for long.

The last group of drifters is consisted of the people who abandon their previous lives. These are the ‘hippies‘ who leave everything familiar behind. They travel off the beaten paths, do not sleep in the hotels, do not eat in the restaurants. They focus on the local environment, make an attempt to live like a local and melt into the new place entirely. They have no return ticket and no intention of going back. Many of drifters felt unfulfilled in their previous lives thus through the travels they find a new mental and spiritual center. They are driven by the strong contestation of the order in their home society. Contrary to the explorers, the drifters attempt not only to know ‘the other’ but also to develop an empathy and deep understanding. A good example of drifters are people who left their homelands and moved to a kibbutz.

This is what the science in the 70s argued about. Although this is considered a classic categorization of tourists is has been contested by the young researchers. The scientists are now more aware of the internal diversification of the tourist groups and, as a consequence, there is a continuous argument on who is a tourist and who is not.

What do you think about the division between a tourist and a traveler? Do you feel one of them? If so which one? Please, comment below which type of a traveler you are.