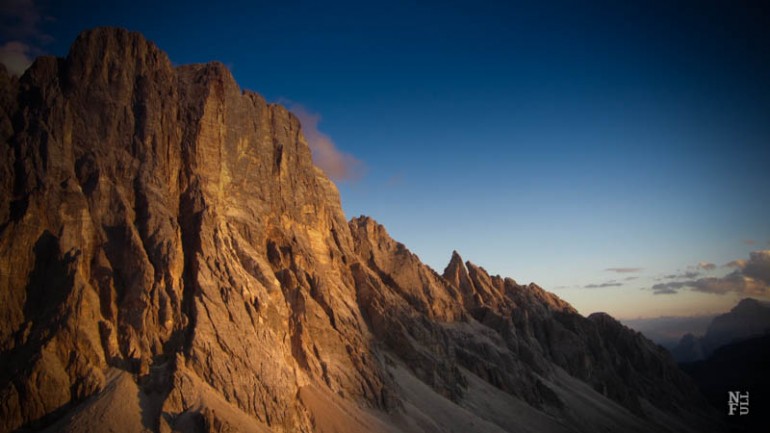 Do you hike? Are you an outdoor activities lover? Have you ever spent a night in a mountain hut or a refugee? If you are a camping type of person you probably did but to some people, this might look like an adventure. In fact, two of our Italian friends have never done it before and so this year’s plan was to expand the mountain adventure and include at least one night slept in a mountain hut. Here is how we did and how you can do this too, in the Italian Dolomites.

I love the Dolomites in every season. These large mountain chains in the north of Italy provide memorable holidays, breathtaking views and outstanding level of services to all nature lovers. I tend to go back there at least once a year and I never get tired of its views. In major part, I spent time in Val di Fassa, which is the most developed part of the mountains but this year it all went differently. It was five of us and we explored a totally new area: Monte Civetta. Here is a review of a two-day hike we did in the second week of August. At the crossroads, the Dolomites, Italy.

We stayed in an apartment in Caviola, a small village near Falcade. Although this is not that far from Val di Fassa, these two places are located in different Italian regions: Val di Fassa is a part of autonomous region Trento-Alto Adige, while Falcade makes part of Veneto. This might look only as an administrative detail but you can spot the difference in a minute. Val di Fassa, through its extensive international promotion and excellent ski facilities, earned a title of one of the best places for skiing in the world. For years, it has gathered thousands of skiers and it increased its income quite successfully. Being an autonomous region Trento-Alto Adige keeps the major part of this income while Veneto does not.

Luckily, the Dolomites are for everyone. If you are more into social life and high standard services you will find Val di Fassa appealing. If you prefer tranquillity and contact with local people you should stay in Falcade, Caviola or Alleghe. Both areas are just fine if you know your preferences. Near Rifugio Coldai, the Dolomites, Italy

In the early morning, we took a cableway car from a lake town Alleghe called Ski Civetta. At about 9:00 we started our walk up. The first part of the path is more like a walk in the park. After 15 minutes we arrived in a small mountain hut where sheep and goats are held. The milk is used to produce delicious cheese that we bought on our way back. From the hut, there was a one hour walk up to the refugee called Rifugio Coldai, at 2315 masl. It is located in a beautiful place, surrounded by high grey rocks and looking at a very weird peak called Pelmo (3168 masl), that grows out of nowhere. We ate a strudel in the refugee that was slowly filling up with the tourists. We continued our way up for a while and after less than a quarter we saw a beautiful small lake. We went down and enjoyed the panorama of the town Alleghe way down and high white rocks mirrored in its surface. The lake was a busy place. To some tourists, this is an arrival point and so the meadows near the lake were full of picknick baskets, colorful blankets, and families with the kids. A spectacular place for a picknick, indeed. The lake along our way to Rifugio Tissi, the Dolomites, Italy.

Our target was Rifugio Tissi, though, at the altitude of 2250 masl. We saw it way before arrival! There was still more than one hour climb when we spotted it for the first time. It seemed very small and distant but smartly located. There were two different paths to take: one just below the rock wall and the second one which leads first down and then up. We picked up the second one and in the heat of the day we climbed right to the refugee. It did not come easy. For me and my Polish companions, the heat was unbearable. This hour climb might seem not much but, considering the circumstance, this was a challenge. The whole hike took us around three hours. The final part was especially hard as it leads up and in the heat of the day it was not really pleasant, however, we got our reward. On a blue sky, there was the whole chain of the rocky peaks seen from the window of our room and the terrace of the refugee. The final part of the walk, Rifugio Tissi, the Dolomites, Italy

The building itself is old and used by endless generations of mountain trekkers. The quality of services was not as we expected. The bathroom was small and crowded but it was the shower that beat everything. The shower hung just above the squat toilet, sometimes called the Turkish or Indian toilet. Believe me, this was not the most pleasant shower I’ve had.

The real pleasure of sleeping in a refugee is the sunset. Along the unexpected crowd of other tourists, we climbed a few meters up and enjoyed the view. On the one side, there was a high wall of the Civetta peak that turned into a mild rose colour. It is sometimes called “the wall of all walls” due to its difficulty and fame among the alpinists. The sun is setting down, Mount Civetta, the Dolomites, Italy.

The setting sun made all the frayed edges of the rocks visible. The mountain seemed like it was a living thing. The colours exploded into a vivid orange to fade slowly after the sun set. The real nature show available only to those who stay up there for the night. We slept in a room with 8 bunks and this was one of the downsides of our stay in Tissi. The other tourists did not bother to take a shower and made a horrible noise snoring loudly. This was definitely not the best night ever but we survived it. At 5:00 a.m. we heard the thunderstorm and heavy rain hit the room right after the first thunder.

The next day we ate our breakfast at 7:30 a.m. From the restaurant window, we were watching the peaks covered with white clouds. We left right afterwards and repeated the hike of the previous day. The temperature dropped and with no sun in the sky it was much easier to deal with the path. Another great thing about starting a hike from the refugee high up in the mountain is that you meet the crowd later in the day. When you’re going down, they’re going up. It’s like watching a traffic jam from the air.

We stopped for a while to buy the goat cheese for our lunch and went back home. Although the quality of the refugee was far lower than expected we enjoyed the hike. I cannot recommend the Tissi Refugee to stay for the night but the hike to the Civetta Peak is worth the effort. The views are fantastic and the path itself of a medium difficulty. We enjoyed it that much that we decided to repeat the experience. The next day we planned another hike that you will read about here. On our way back.