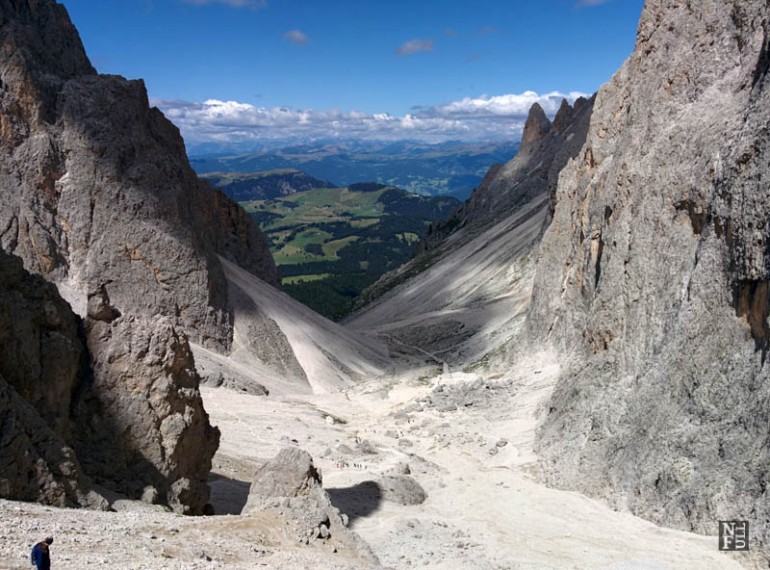 Encouraged by the previous adventure in Mount Civetta, we decided to continue our journey and stay overnight in another refugee. We had one day off for a bad weather and charming meeting with friends who came to visit us. It left time to plan another adventure. Soon, we decided to explore the part of the Dolomites called Sasso Piatto and Sasso Lungo. A few years ago we visited this massif climbing it from the west and Val Duron but this time we scheduled it differently. Ready for an adventure, the Dolomites, Italy

As this was the peak of the season we decided to book a bed in the refugee in advance. I would like to encourage you to do the very same thing. Obviously, the refugee should always host you even if they give you only a floor to sleep on but we were a group of five and didn’t want to risk. When we called, a lady told us there are five posts left and we gladly booked them. Next day, in the early morning, we took the car and drove from our tranquil valley called Valle del Biois, to Passo Sella. This was not a long way but with the heavy traffic in Val di Fassa, it took us as long as two hours to arrive! That’s a lot of time! So again, you should pick up off season months, when you have a choice. We found parking slot and waited in a line for an old fashion cableway car from Passo Sella to Rifugio Demetz, at 2685 masl. The weather was chilly and sunny.

Along the crowd, we followed the path down. The panorama was amazing. This particular part of the massif is all about rocks and sand. If you enjoy a very rough and unforgiving terrain, Sasso Piatto should be your next destination. Along the path to Rifugio Sasso Piatto from Rifugio Demetz, the Dolomites, Italy

A very interesting detail of this trek is that it starts downhill. The beginning was rough mainly because of the crowds. There were people of all abilities and skills, including small children who needed extra care from their parents. Soon, the crowd turned into a line. After half an hour, though, the path was less crowded and in about 45 minutes we arrived in the refugee called Vicenza, at 2256 masl. Luckily, we got a table inside and had a quick lunch. The whole facility, including the terrace, was full of people. We continued our hike and followed the path downhill. It turned west and soon we started to walk around the west part of the massif. The path leads further through a picturesque meadows full of brown-and-white cows, who looked totally happy. Climbing up, we arrived at a large plateau with a lovely view towards Alpi di Siusi. This was a perfect place for a short break before the final stage of out trek. The next part of our walk was one of the most beautiful paths in the Dolomites, and at the same time, one of the the easiest one. Green hills, grey rocks, and small streams, all shined in a mild sun, making the walk carefree and relaxing. Down, down, down. The Dolomites, Italy.

After three hours in total, we arrived in the refugee. Rifugio Sasso Piatto, at 2301 masl, is one of the most beautiful ones that I have ever slept in. It is modern, well kept and very well organised. We got the key to our room quite quickly and were guided to a shoe room. We got our crocs and followed to the rooms. Wooden floor, large windows, new beds and clean bathrooms welcomed us. Also, the views from a comfortable common room were magnificent. This refugee is highly recommended for the night, especially to someone who has never done it before. After a delicious dinner, we had a peaceful night and woke up relaxed. We had a short breakfast and started our return home. Along the way from Rifugio Sasso Piatto to Passo Sella, there are as many as three other refugees. First, a small wooden hut called Sandro Pertini, at 2300 masl. Last time we were there off season it was closed, but this time, we finally entered and had a warm tea. The weather was chilly so it was most appreciated. This part of the walk was pleasant due to the absence of other tourists. The silence was overwhelming. We could fully enjoy and appreciate the luxury of solitude that only the high mountains can give. After half an hour, we arrived in another refugee called Rifugio Friedrich-August 2398 masl. Large building seen from the distance welcomed us with the incredible smell of freshly baked sweets. Our Italian friends could not resist the smell and ate one bombolone each. The last half hour was a light walk down to Passo Sella where a luxury hotel opens its door to all. It is called Passo Sella Resort (2180 masl).

The trekking around Sasso Lungo is doable in one day. We decided to split the hike in two days to get a profound experience of the Dolomites. I must say, it was truly enjoyable. A rich experience that I would recommend to anyone, including the beginners.