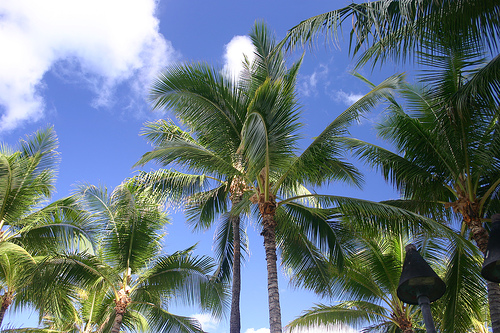 As a kid I was watching a TV series titled Jack and the Fatman. This series was a wired combination of paradise-like Honolulu and crime. While watching this series I tried to imagine what it’s like to be a cop in a Hawaiian shirt. Isn’t it tempting to stay on the beach all day instead to walking in the dark underground parking? Or maybe living in a place like Hawaii you get use to the beauty surrounding and it does not impress you anymore?

I went to Hawaii once. I didn’t expect to go there again. That is why I tried so hard to remember every detail of this trip. I flew from Frankfurt to Los Angeles, changed a plane (from ‘International’ to ‘Domestic’) and landed in Honolulu after 24h since I left home. When asked at immigration office about the purpose of my visit I had to reply it was rather business than pleasure but I was excited with this trip anyway. I never sleep in a plane so travel across the ocean, or in this case across two oceans, was devastating. When I finally arrived to Honolulu I had some difficulties to remember my own name! But the view from the landing plane was fabulous: couple of little green islands illuminated by the sunset. For me it was the middle of the night or rather early morning of the next day but for the locals it was only afternoon (it gets dark very early comparing with Italy or France, not to mention Sweden).

I remember the first impression of Oahu island that came to me as a smell of the air. It is very difficult to describe but there were some fragrances of unknown flowers, salt of the ocean and a smell of a moist soil. It reminded me a smell of a greenhouse with exotic plants but with the freshness  you will never get in a greenhouse. I took a taxi and went straight to the hotel but instead to go to sleep immediately I went to see the ocean. I couldn’t resist. It was dark already, the moon was shining and it was a fabulous scenery. Just like in a movie, I would say.

The next day was spectacular: with blue sky, sun and emerald ocean it was just as I expected. The blue of the ocean was stunning and I had an opportunity to see it from the 16th floor in a hotel just around the corner of Kalakaua Avenue and Kuhio Beach Park. As it was June the heat was unbearable. Either you could stay indoors in air conditioned room or go to the beach to feel the breeze from the ocean. Hanging around in the city was out of the question before the evening. Fortunately, the center of Honolulu is provided with a variety of ethnic restaurants and so I could enjoy my favorite Chinese food late in the night.

Well, to be honest: Waikiki Beach. I have never thought it is so narrow! And so close to the main boulevard  Sitting on the beach is similar to the sitting on the bus stop and waiting for the bus. But it’s quite easy to deal with it. No need to get angry. If you leave the main and very crowded part of Waikiki beach and walk a bit down to the south you will be awarded with wider and less crowded beach. There are sill people there but it is much less frequented than the main part of Waikiki located near shops, cafes and the Royal Hawaiian.

One of the most painful memories I have were my back burned by the sun. I went to the beach just for an hour but got immediately burnt. It hurt me until the end of my stay in Hawaii, during the flight back and a week after return. Nasty memory. One of the biggest surprise that might seam to be funny for people who live by the ocean is that the current and waves are so strong. Even close to the shore you must be very careful when you enter the water.

All in all, if you have always dreamed about Hawaii I think you will not be disappointed. Other smaller islands in archipelago are full of attractions and I am pretty sure you will find something for yourself. For me it would be great to visit Hawaii again but only for whale watching. Once a year these huge mammals come to Hawaii to sing their song. It would be thrilling to see it and listen to their song.