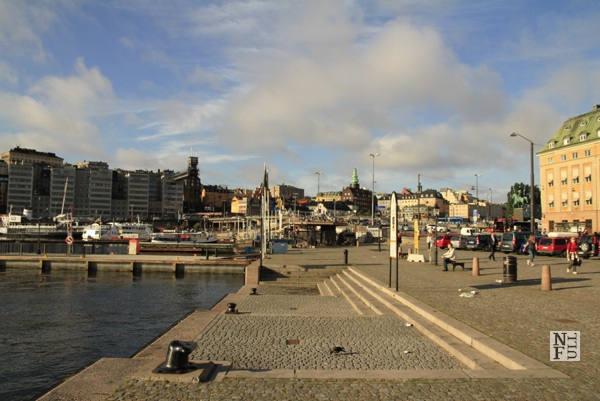 I visit Stockholm every year. Usually, at the beginning of September or in late August. It’s not that this is my favorite holiday destination but this city is friendly enough to make a short stop. When I go to Stockholm the weather is usually surprisingly nice: sunny and warm. Only once I was almost washed off by the heavy rain. So if you think about visiting this city check the weather forecast and be prepare for every possibility.

Although I visit Stockholm regularly I haven’t visited the city in details. As this has always been a transfer place I’m hanging around with a considerable heavy backpack. My mind is often busy with the next stage of my trip or is still in a place I have just visited. Therefore, I have never treated Stockholm in a fair way. My memories are biased in a twisted way: I always needed to spend in Stockholm a certain time before the plane take off and it allowed me to waste it without a plan. What I normally do when I’m loaded with a full backpack is that I often visit small cafes spending hours on drinking coffee, watching people coming and going, witnessing the rush morning hour or lazy afternoon. This sort of activity seams to be an obvious waste but after couple of years I have started to appreciate time spent this way. But let me tell you about my visits in Stockholm first.

Most striking thing is that Stockholm is located on couple of large and dozens of small islands. This city is immersed in water of lovely deep blue color but the way the islands are constructed makes a bizarre feeling. This is not a floating city at any measure. It looks almost as if the islands were constructed first and the sea came after people decided to do so. I’m not really sure what is the reason of this impression, but the water in Stockholm looks like a well planed and fully controlled element of the city landscape. So, if you’re fond of water, canals, bridges and boats Stockholm is the right place to visit. As a large city located over water Stockholm has amazingly well developed and kept public transportation. Using trams, buses and water buses you’re able to visit the most important touristic spots. One of the very few museums I visited was the Nobel Museum located in the heart of the old town: Gamla Stan. This museum is very small, it has a modest exterior and very limited exhibition. To be honest: you’re able to know more about the Nobel Prize through the Internet rather than in this museum. Few objects used by Alfred Nobel are exhibited there, including his last will which established his famous prize. Information about the winners are placed on small boards just below the celling which makes it really difficult to read or at least see the photo of the laureates. There are some short movies on the most important discoveries in our modern history, some interactive screens to explore the winners’ bio or the academy verdicts but this is very scarce. ‘Behind the scenes’ part is very humble and if you expected to know how the award process looks like for real you’ll leave this museum disappointed. I took a guided tour and the lady was equally restrained. OK I will tell you the truth: I went to this museum only because it was raining. And I see no other reason why you should do it at all. Luckily, it was half priced so I didn’t have to regret too long. One of the huge surprises in Stockholm is the quantity of bicycles. Now, if you think about a city in the north located on the island with high probability of rain and strong wind you see no reason why people would use this mean of transportation. But the do. I swear that the majority of the residents use bikes everyday irrespectively the weather conditions! If you sit on a bench in early morning on let’s say Skeppsbron you will see hundreds of people on their bikes. This is an amazing view as the huge bunch of riders heading towards north passes your bench you will see all sorts of people: men in suits, students, kids, well dressed women, youngsters dressed in a very strange way and vivid colors, policemen, and I wouldn’t be surprised in the king himself would ride on his bike as well.

While some exotic destinations would surely beat Stockholm in number of bicycles and chaos of traffic rules this view of morning rush hour is still impressive. Bicycles in Stockholm is a pro-ecologic choice. The City of Stockholm declares:

The number of cyclists in Stockholm has increased by 75% in the past decade, and there are as much as 760 km of cycle lanes in the city.

Everybody, including the tourists, are strongly encouraged to use bicycles as their mean of transport while in the city center. This is an important element of the governmental plan of sustainable development and pro eco policy. Judging out of the number of bikes seen on the streets it looks like the government was very persuasive.

Why wasting your time while hanging around is positive to your travelling? Because it creates space and time to process your impressions and emotions. When you’re travelling the quantity of the impulses and attractions is often overwhelming so you can’t really deal with them in a real-time. Sure, you’ll have time after you get back home for that but if you find time to waste it during your trip the process of dealing with everything what you see and what you sense proceeds differently. This is a great opportunity to allow your mind get totally immersed and drift away. By the time you find it, it will be altered. And then suddenly you know the journey you made was absolutely necessary. And you can get back home remembering it forever.