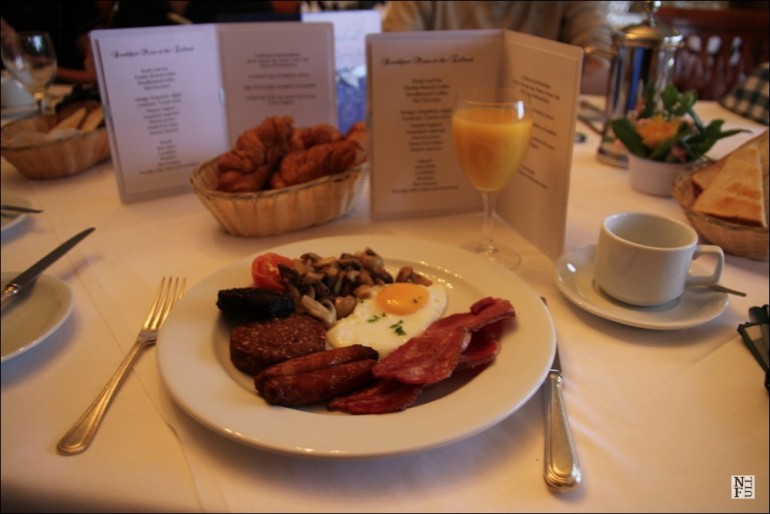 I know that some people would not considered Ireland a world capital of good food but I think there is much to talk about.

Just this morning I found out that ‘full’ means in Swedish ‘drunk’ which would be really bizarre if used with Irish breakfast afterwards. Well, there is nothing of that kind with full Irish breakfast. Here is what we are talking about: eggs, sausage, beacon, beans, tomatoes, white and black pudding and mushrooms. My favorite part of it would be eggs and sausages, and, in fact, if you eat a similar breakfast in the UK or in Canada the sausages are always very tasty. The basic difference between the English version of breakfast is white and black pudding. Now, I’m not an expert and I won’t tell you what is inside but I can assure you it is quite good and it gives an Irish flavor to it. I like it. My Italian readers probably turn their heads with disgust by now but I would like to assure you that such breakfast eaten in Ireland would be really good. If you think about gloomy weather outside, rain, fog and cold it might slightly change your opinion on that.

For me eating full Irish (as they call it here) when I’m in Ireland is a perfect solution to go through the day. Just like Penny from the Aran Islands was always saying. And it works. When you eat this breakfast you don’t need to worry about lunch. It will allow you to last until the dinner time.

If you had full Irish skip it. But if you had a light continental one you could think about eating a sort of snack before the lunch brake. As we were crossing Ireland we spent a pleasant morning in a small town Roscommon. We stayed at the Glesson’s Cafe having a delicious second breakfast. Freshly baked  fruit scones is something between a cookie and a muffin, it’s sweet, it has raisins in it and I ate it with homemade confiture. The place is known for its excellence in the area. Their products are prepared by themselves and I must say they are really tasty. The scones are also baked without fruits and can be eaten with cream or butter. When looking at the picture and the size of the scones you might think this is not much but I can assure you that one scone is enough to fill your stomach!

That’s right, it’s only noon and we already have three meals eaten! I don’t expect that all Irish eat this much everyday, however, the beauty behind is that whenever you feel hungry there is always something suitable you can eat. And it’s awesome! Especially, when you travel and it is hard to plan the precise time of having meals. Irish lunch comes in a huge variety: both in terms where you eat it and what you eat. To give you two examples: a family owned pub in Newport called Grainne Uaile welcomed us with a traditional soup and stew, while Mulranny Park Hotel prepared fresh oysters. Huge variety of food served gives you an opportunity to try something else each day. The speciality of the region would be sea food, a variety of fishes but also venison. It was the first time I have eaten an oyster. Ever. Although it was served in a very exquisite way with pomegranate and other bloggers said it was delicious I would admit that this is not my favorite food. I am very happy I tried it, though. Now I know for sure that I prefer meat. You can’t leave Ireland before you drink a pint of Guinness and cider. And there is always good time to do it. Any time after noon, I mean. Now, I’m not a huge fan of beer, to be honest, so you might not believe in what I say about it, but I was very lucky to visit the Guinness Storehouse and to join the party for the Tbex bloggers there. The part itself was fabulous but let me tell you a word about the beer.

As the Guinness Storehouse is a core of production process of this excellent beer, the history of this family run business was introduced. We had an opportunity to meet people whose responsibility is tasting the beer on a daily basis to make sure its quality is perfect. The storehouse prepares a sort of short show in beautiful interiors with instruction from the experts how to drink it. I followed the instructions and tried one small glass of Guinness starting with sniffing its aroma, and having white mustache after sipping it. So, if me- a beer abstinent- says it was good it really means something! For me cider would be a favorite drink in Ireland and in the UK. I also drunk it in Canada and it was also delicious. Unfortunately, I had no chance to try the small local companies products and was always drinking the most popular ones, but even though it is very tasty. I need to get back to Ireland to taste some local ciders some day.

Dinner and everything else

By the time it’s evening you might be very hungry or completely full, depending on how many of the meals you had through the day. Evening would be a good time to sit in a pub and have a traditional fish& chips with a pint of beer, but it is also excellent opportunity to visit some fancy restaurant. We had a chance to try both: traditional Irish cuisine and some new compositions of tastes (seaweeds seams to be very trendy at the moment).

Two remarkable places with excellent food: Twelve Hotel and Portfinn Lodge& Fjord Restaurat. The Twelve Hotel served all seafood imaginable, including exquisite dumplings with seafood filling. They were placed on seaweed and served on a St. James shell just like the picture below shows.

Fresh salmon was one of the most frequently served dishes throughout the trip so we had an opportunity to eat it in five different varieties, at least! One of a variety was served in Leenaun: a charming located village at the shore of the only irish fjord. With its stunning views the Portfinn Lodge& Fjord Restaurat was one of the most remarkable dinning locations during our trip. For me old school fish& chips are just fine, especially with the Irish version of potatoes, which are very thick in comparison to the British version. You need to remember, however, that the plates are enormous. It is quite obvious if you think this is one-plate meal and there is no need to eat anything else. How silly of me! I had fish& chips once and the size of a plate was scary. I wasn’t able to eat even half! So, keep in mind that you should limit the number of meals. I think this is enough to make you hungry.

To wrap up: I think Ireland has amazing variety of food and drinks that make your journey there a very tasty experience. Irish pubs and restaurants would satisfy even very demanding eaters. Just take your time and enjoy not only the taste but in most cases amazing interiors. That’s what makes the experience complete.