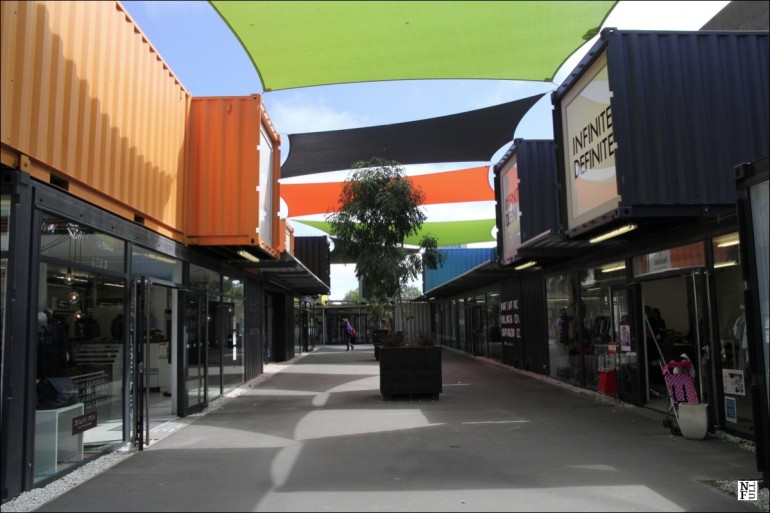 What you see when you come to the city center in Christchurch? Ruins. Lots of empty slots. Huge cranes and trucks. Ongoing construction. All what the city needs to recreate itself. Despite this, I enjoyed my stay in Christchurch for couple of reasons: lovely weather, interesting spots, freedom of movement by bike, staying for longer than one day at the same place, and meetings with people. One of the best meetings during these few days in Christchurch was the one with Marc from The Press. He is a journalist with strong focus on the earthquake related issues so he was absolutely perfect to walk around the city with and talk about the disaster. Nobody expected this earthquake. Just like nobody expects many other natural disaster. It is true that both islands of New Zealand are located in seismically active terrain but the earthquake was expected to hit other parts of the islands. Not Christchurch. It all went differently than expected and when the first shock hit Canterbury everyone was surprised. In the worst of possible ways. In early morning, September the 4th, 2010, at 4:35 a.m. it all began. I can easily remember this feeling as the earthquake I survived hit Italy at 4:10 a.m. when me and thousands other people were deep asleep. It is shocking when a moving house wakes you up, all shelves and wardrobes at home fall down and you are left with impression that within a second you will be quite death, crushed with a falling ceiling. Traumatic event that leaves you agitated for long weeks and what is really annoying it is magnified with every aftershock. One of the local industries hit by the quake

In Christchurch aftershocks were numerous and powerful. One of them brought even more damage and terror than the first one: on Tuesday, 22 February 2011, at 12:51 the earth shook again. One of the damages was particularly dramatic: the CTV building at Madras Street collapsed killing 115 people in a second. I could go on this way and report here hundreds of aftershocks, numbers of wounded and death, but I’m not going to report here every detail of these events. You can easily find it elsewhere. I’d rather report the guided tour around this destroyed city and – what’s even more important- a process of the city reconstruction.

It is useless to describe any natural disaster: if you have never experience anything like this you will never imagine how do you feel when it hits. It’s just inexplicable. It is even more surprising how easily you share the traumatic events if you experienced it. Just like with Marc and other people from Christchurch: we could easily understand each other just because of the very similar experience we went through. Very few people are able to imagine the fear and panic that floods you in a second. And makes you act like a hero or a coward and you can’t really predict which one is your fate. Let’s leave these difficult emotions behind and think about the panorama after the earthquake. Sumner village cliffs after the earthquake

The city was badly damaged. It is said that about 80% of the buildings in city center were ruined. After the first few weeks filled with saving what’s left people started to clean the center. Those who haven’t left the city started to think about the future of this place and started from the basics: they decided to bring back some life to the city center.

Despite the annoying aftershocks people from Christchurch continued their effort and after few months the so called Re:Start was established. Below you will find a timelapse clip of the final week of construction. Sixty one containers arrived on the 29th August 2011 at the port of Lyttelton and were subsequently placed in the city center recreating the shopping space called Cashel Mall. All construction process was nicely done and currently I can assure you this is a very beautiful part of the city. People use this area for shopping, meeting friends, eat out or simply walking around. The feeling is pretty awesome, especially if you look at the close sites of bare land. It is also a powerful message that this city sends: the residents will not leave it just because it was so badly hurt. To see physically the strength of the wounded community  is really impressive.

This is just the beginning of a large scale reconstruction plan. The scale is a challenge itself: New Zealanders need to rebuild almost the whole city from scratch. But even when they finally do people who survived want to remember it. How the city looked like before the disaster and they also wish to remember those who lost their lives under the ruins. A modern museum called Quake City was established. Firstly to explain to the visitors what happened, then, to keep some iconic elements of the buildings collapsed, to educate about the geology of the earthquake and to remember all who died. I think this is really important for the collective identity to keep records of traumatic events and I found the Quake City very interesting. Let me share two pics from this museum I find really inspiring (apologies for lousy quality – taken with a cell phone). Elements of the cathedral that does not exist anymore

There is controversy behind the scenes, just like elsewhere in the world when a natural disaster occurs and the government tries to deal with it. Some people were not happy about the way the issues related to the earthquake were managed while the others were quite content about it. When the earthquake hit Christchurch received a substantial help from other cities and from abroad. The emergency squads were sent from many places and people hurt were not left alone. Human solidarity is always impressive but the longterm activity and final results matter.

One of my blogger fellow – Ari – went to Christchurch earlier in 2013. She has slightly less optimistic thoughts about it. Read here story here to get the full picture of this disaster.

I didn’t go into enough details to take sides here but I can compare the results of the local government, entrepreneurs, constructors and ordinary people work done after the earthquake with my Italian experience. All I saw in Christchurch is pretty impressive and most inspiring. I really hope that in few years this city will be a vibrant and full of energy again, beautiful and amazing, and wise because it learnt a lot in last few years. I wish all the best in the world to Christchurch residents and will keep looking at this awesome reconstruction, their daring project and visionary ideas. I am pretty sure that in few years tourists will visit this place to admire the city that reconstructed itself in best of possible ways.

How about a quick look at the New Zealand tropical beach? Click here.