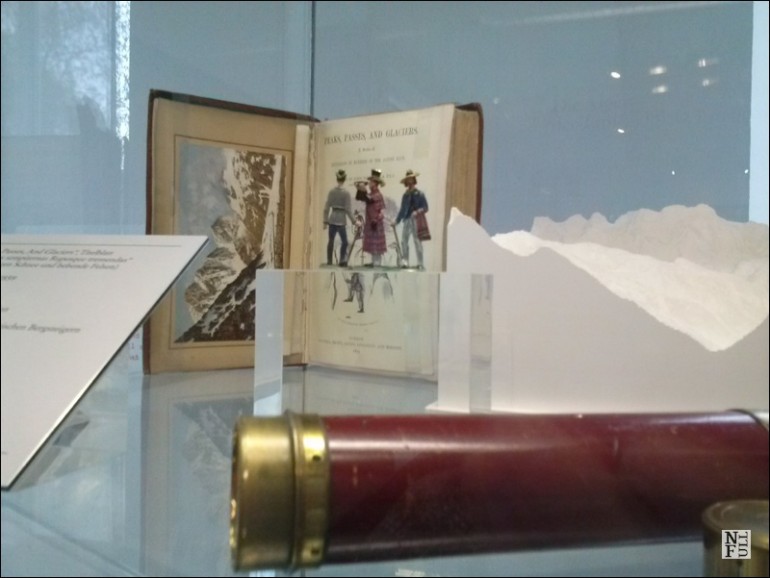 If you follow this blog long enough you know that I like visiting small and off the beaten track museums. Although I appreciate the mainstream art I immensely enjoy modest exhibitions focused on a single city or a theme. A good example was one of my favorite museums of all times – The Little Museum of Dublin – of which even the name is cute. Visiting small museums all over the world I realized they have a particular set of properties that I like very much. The exhibition is small enough to visit it in a relatively short time. Its narration is usually cohesive and understandable. And lastly the staff is very friendly and because of the size of the museum it also gives you an opportunity to interact directly with them (=experts).

My last trip to Munich was very enjoyable in terms of one day hike in the Alps but also two interesting visits in a museum: Neue Pinakothek and Deutscher Alpenverein Museum. Pinakothek: the name says everything. It is very traditional sort of a place with beautiful pictures on walls. Large, obviously. I liked it but the second museum by the Alpine Club was much more sophisticated.

Deutscher Alpenverein Museum has only 4 rooms. Seriously. And in these tiny little rooms it contains exhibition focused on brief history of hiking in the mountains. B-R-I-E-F. What is striking is that this sport is so young! More than 250 years ago nobody would climb mountains for fun! It was originally connected to scientific and academic world: various geologists would climb some mountain ranges to get know the properties of rocks or to record the geological history of the area. And they were doing this in their ordinary clothes which always makes me laugh! Oscar Wild claimed: “You can never be overdressed or overeducated”. I have a second thought about it.

By 1900 all prominent European peaks were climbed and named and I think it shows the real explosion of this activity. For couple of decades, however, climbing remained a highly exclusive hobby and climbers were recruited mainly from upper classes. In early years all Alpine Clubs, including the British one established in London and the German one established in Munich, were for selected wealthy and highly educated people. In that time British aristocracy simply invaded Swiss Alps climbing all highest peaks and enforcing its exclusive character. Along the development of this expensive hobby critical changes occurred. On the one hand climbers seeking out increasingly demanding challenges caused design  and production of modern climbing tools. On the other, a substantial development of facilities was noticed. Soon, the European Alps became a crowded place. Urban comfort pushed into the wilderness, as the Visitor’s Guide puts it. Two important mainstream trends: skiing and physical fitness – contributed later to further expansion of the mountain tourism making it also open to young people of non aristocratic backgrounds. And finally this process ended up with increase concern over protection of wild mountain area, as we know it today.

My visit in Alpine Museum

Being small and being focused on mountains seemed to me a perfect combination to spent one afternoon in Munich with. The weather was nice so I took a long walk along the river to finally reach a small island where the museum is located. Just as I expected: a warm welcome from a nice lady just for a start. After I paid 3 EUR of admission fee I received a thorough explanation of the exhibition with a short guidebook in English. One of the weaknesses of this place is a total absence of the English signs but with this little booklet I could enjoy my stay in this museum and actually understand what I watched. The collection of old and original books is pretty impressive

It took me about 1 hour and a half to watch the exhibition, read the information in a booklet and talk to the staff. I always enjoy watching old pictures and equipment. It always strikes me how difficult the beginning of climbing was. But what I love most about this sort of museum is the thought you have on taking for granted some of the present habits. And suddenly you discover that the obvious things are not that obvious. And that the moment when you’re ready to hear the story told in a museum like this. I enjoyed listening to it very much!

Disclosure: all pictures were taken with my cell phone rather than the real camera. Apologies for the poor quality.