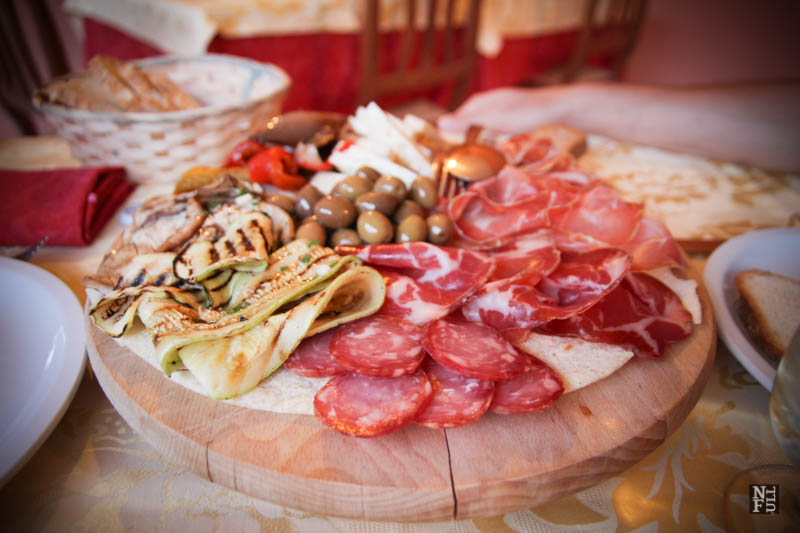 One morning we got invited to participate in cooking with the family we rent the apartment from. The mother and the daughter were waiting for us at 9:00 am in their apartments. There was also a silent father present who, with a kind interest, was watching his daughter and wife running the show. This was not the first time I participated in Italian cooking classes. It was still special because of the whole family present on site. I could observe and experience two generations’ meeting in the kitchen and the way these two extraordinary women work together. I started a conversation with a question about the books I borrowed from them a few days before: a series published by the local paper with photos and description of the local traditional costumes. After a question why they stopped buying the books at part 4 the two women turned into furious beasts. They were so unhappy about the pictures, lack of care, terribly wrong details and, most of all, the sort of pictures taken. In some photos, the models were in aggressive poses and it worked poorly with traditional costumes.

Both women showed their disappointment and thus we cold experience how important the tradition is for them. I couldn’t agree more. Although the albums were printed on high-quality paper and with an eye-catching hardcover, the narrative and the concept of making the traditional costumes ‘up-to-date’ was so wrong! This was poorly done. Somebody attempted to bring the tradition closer to the present times but failed. Due to copyrights I cannot insert here any pictures of these books taken on site. Soon, we left the books and focused on cooking.

It all started with the preparation of a wooden table and bringing the ingredients. First, Maria Efisia – the mother – prepared filling of the ravioli. They used a particular kind of cheese called ricotta and although you can buy it all over Italy the one in Sardegna contains not only the milk of a sheep but at the final stage of the process, unlikely elsewhere in Italy, the farmers add more cow’s milk. This extra care results in extremely mild and delicate cheese.

Thus, with few yolks, saffron, and nutmeg, a very tasty filling was formed. We, then, could focus on preparing the pasta and, what takes most of the time, rolling and forming the ravioli. Along the process, when our hands were occupied, Maria Efisia was telling us about their family and village, about tough times and few joys they have. She was extremely proud of her actions that saved old baskets made out of cane.

In the late 60s, people run mad about modern plastic objects and they were throwing away all that was old and hand made. It includes a total refurbishment of the local church which we saw last Sunday and which today looks like after a fire that destroyed everything that was ancient. Maria Efisia on the contrary: she was conserving not only the heritage of her family but also went to the courtyards where her neighbours were throwing away their old stuff away. She showed us her collection of baskets used in cooking. As this was hand made, the current price is really high so when she showed us her treasures she was holding them as something precious.

Maria Efisia was emphasising how expensive these objects currently are. Watching this woman attachment to the past it felt very special. Although she showed us the most important things for her she did it as a person who realises that the past will never come back. She feels like a real hero in the contemporary times who struggles and fights against the odds in order to preserve the history of the family and the place. Miraculously, her family has always been and still is into the farming business, thus, the worst crisis that hit the island after mining business collapsed, bypassed them. It was touching to watch their struggle. They all are very proud of living in the same place for 7 generations, their hospitality is legendary. They, just like hundreds of others, struggle to find their place in the contemporary society. They feel very far from the mainstream society and the things that happen in Rome – on the continent, as they say. Contrary to the rest of Italy, where people tend to be optimistic, here you hear a tone of despair. People here know they live in the peripheries and that the politicians in Rome or Brussels care very little about their wellbeing. Some of them feel left behind and for some of them this is a call to act and to take care for themselves. I’d say that people in Sardinia are focused on survival with a strong flavour of tradition and their own identity.

And so, talking through the history and presence, we successfully produced about 300 ravioli. They were all stored in old baskets in layers interlarded with a clean table cloth. It was left until the next day when we got invited for a dinner. We came in the late evening. The whole family was there and so, with no further delay, we started the feast. The hospitality of this Sardinian family was overwhelming. The food was so good that after starters I ate enough but there was still the first and the second course, meat and the dessert with coffee. I skipped the meat but it smelled so delicious that I got a dog bag and I could taste it the next day.

This was a very pleasant day. I learned not only the new recipes and cooking skills but also a history of the family from Fluminimaggiore. I also had an opportunity to watch their pride and hospitality from a close distance. Altogether this was a marvellous experience.