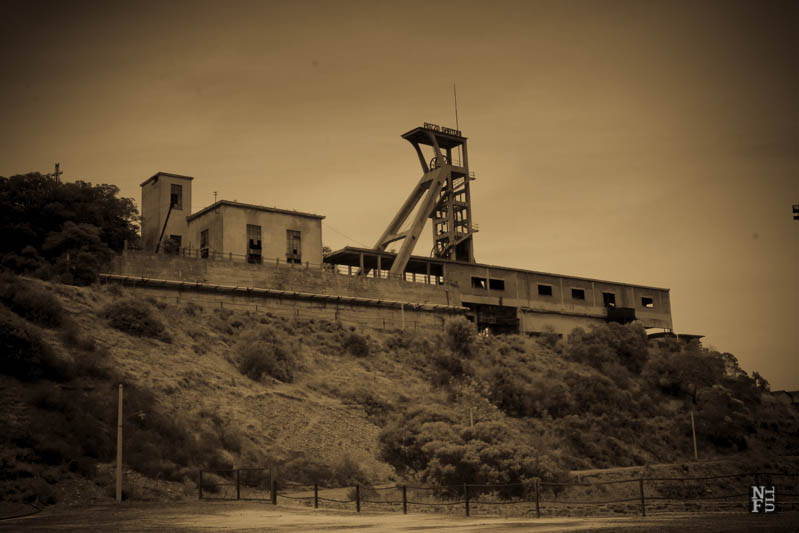 The industrial monuments are not beautiful. At least not to everyone. It is important, however, to visit at least one of them while you’re in Sardinia, due to historical and social reasons. The last 200 years of the history have been tightly connected with mines. And, as often happened elsewhere, the mining boom turned into a spectacular failure leaving behind hundreds and thousands of people in a tragic situation of unemployment. It all happened very quickly and until today this area has been marked by this scenario. Montevecchio mine turned into a museum.

We visited the biggest mine in the area called Montevecchio. Two guided visits focused on workshops and minerals excavations were an eye opening experience. First, the scale of this place impresses all visitors. The terrain of the mine is spread through miles and miles on the ground, and even further under the ground.

The visit started with watching huge buildings which in the past hosted workshops. Although they seem quite empty today there are still a number of old machines collected so you could get a feeling of this place. A huge furnace, smaller gantry, milling and a variety of other tools and objects are in display. I found it touching that the tools are left in the exact spots as in the past and above our heads the black and white photographs showed the labourers working on them. Montevecchio: a workshop. B&W banners above our heads with the old photographs.

Above all, the smell of this place is compelling. For me this was a smell of a garage owned by my grandfather. A place where a lot of unused objects where kept which meant an endless playground for me as a kid. This is a mix of old oil, a variety of metals, rust, and a child’s imagination. Workshops were a place buzzing with the energy of the people who worked here. The noise and the heat were mixed with a fellowship of the skilled labourers for whom this place was everything.

The Daily Life of the Miners

A modest daily income was only enough to survive and in the major part the workers’ length of live was really short. The incidents, injuries and deaths were the common events and to some extend the management of the mines were covering them up so not to pay any recompense to the families of the dead. The most what the mine could do when a father of the family died was to keep his job for his son. Men, women and children altogether were living in this dreadful place. I can’t even imagine the heat in the middle of the summer and their tiredness after a long walk from a nearby village and 12 hours shift. I’m trying not to think about all dead miners whose bodies were left underground and never returned to their families. Montevecchio: one of the buildings.

We passed from the workshops to the very heart of the mine: a tunnel to the underground galleries. A huge engine is placed in a nice looking building just in front of the mining shaft. Both connected with a huge rope. Our guide told a story on how important the job of a controller of this engine was. At the beginning there was no communication between the engine room and the underground thus it was up to the experience of the operator to stop the elevator with miners at the right depth. As the work was continuing 24h a day there was a constant move up and down. The elevator was carrying people and minerals so this was crucial place. And a few times it happened to stop an elevator in a wrong place making the miners a wrong idea of the gallery. Some of them jumped right into the darkness to be never found.

In the peak of its activity Montevecchio was employing up to 3600 miners. In the course of optimisation of minerals’ excavation the management built a number of houses so the people would come to work less tired than after crossing a considerable distance from the villages. They also constructed a small train that would bring the miners to the mine. And the most important invention was a sort of a small train locomotive equipped in a loader. It increased the tonnage of the rocks excavated from 6-8 wagons per two miners per day to 60. The improvement was unprecedential in the history of mining and Montevecchio, where this machine was constructed, sold it to the mines all over the world.

Visiting the industrial sites is somehow a devastating experience. Not only in terms of social changes that deeply transformed the Sardinian society but also in terms of a pollution of the environment. Until today, there are some small streams and rivers polluted with sulphur, acids and heavy metals. Although it’s been years since the last mine was closed the repercussions of this industry still bother the local villages and the whole island. Looking at the landscape crushed by the human activity left me deeply disturbed. Sure, it’s been ages ago and the current technology is well advanced in keeping the pollution to the minimum but there are hundreds of places around the world where the human activity will leave scars on the face of earth. Broken glass of the buildings, rusty conveyors, small trains left to be rotten and empty pools make the overall impression of the final destruction. Armageddon would probably look very similar.

If you are interested in industrial sites Sardinia is the perfect place for you. The Montevecchio museum is highly recommended: not only the tours are interesting and well planned but also the staff is very friendly and knowledgable. If I was to chose one out of two – Galleria Henri and Montevecchio – I would definitely go for Montevecchio!

In ten days weeks, I’m going back to Italy. I’ll bring you more stories from Emilia – Romagna so stay tuned!

Montevecchio: the area of this mine is vast.